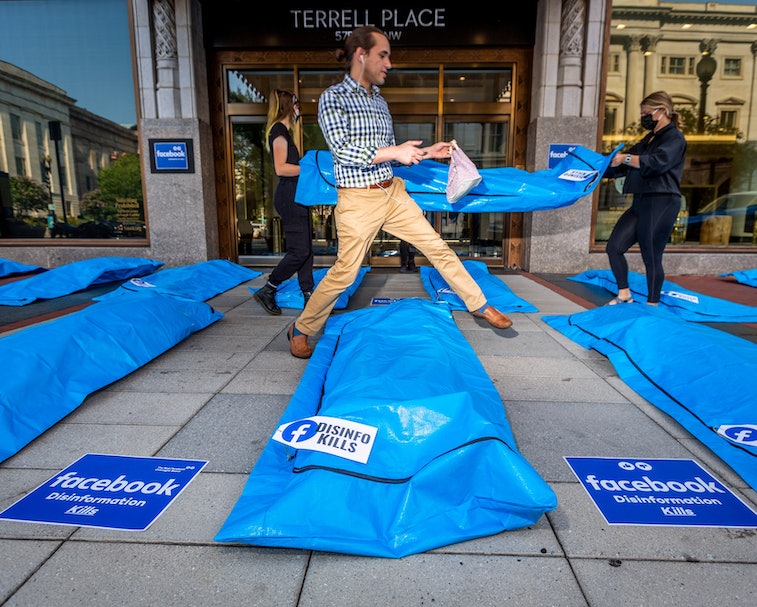 If you happen to wander past Facebook’s Washington, D.C. headquarters today, you might be treated to quite an unusual sight: Bright blue body bags — a dozen of them — lining the sidewalk. From a distance they appear to hold real human bodies in that surreal blue plastic; it’s only upon closer inspection that you’d notice the white tags, each with a Facebook logo and the words “DISINFO KILLS.”

Today’s eye-catching protest is being staged as part of the RFOB’s new “Quarterly Harms” report analyzing the spread of misinformation across Facebook platforms. The report finds that, in the last three months, a group of five “known disinformation superspreaders” have held the most popular post spot across Facebook a staggering 83.4 percent of the time.

The sway of the chosen few — Much of Facebook’s messaging around misinformation is that, at the social network’s immense scale, it can be very difficult to hunt down and destroy. But the Real Facebook Oversight Board sees the misinformation as much easier to track down than what Facebook purports.

As the organization sees it, the most prominent sources of misinformation link back to a select few popular Facebook posters — the RFOB calls them the “COVID Disinformation Dozen.” More than 73 percent of anti-vaccine content was posted by just 12 Facebook users, the organization says, including the likes of Robert F. Kennedy, Jr. and people like Joseph Mercola, an anti-vaccine entrepreneur with 1.7 million Facebook followers.

Moreover, the RFOB analyzed data collected by @FacebooksTop10, a Twitter account that posts the 10 top-performing link posts in the U.S., and found that more than 83 percent of the number-one posts during Q2 2021 were shared by just five people — all of whom are well-known for spreading false information through Facebook.

Trump troubles — The RFOB’s report also focuses on the Oversight Board’s decision to continue Facebook’s ban on former president Donald J. Trump. More specifically, it speaks to the fact that, despite this ongoing ban, Facebook is still profiting from Trump.

Trump himself isn’t technically allowed on Facebook, but the Save America Joint Fundraising Committee — an organization helmed by Trump himself — has run at least 251 ads promoting Trump’s recent rallies. Team Trump’s ads racked up more than 1.3 million impressions between June 16 and June 25 — and Facebook earned more than $15,000 in revenue from them.

Facebook is letting this happen — If the Quarterly Harms report hammers anything home, it’s the fact that Facebook knows very well how to take care of the lion’s share of misinformation across its social network. And yet the company chooses to do nothing.

The misinformation spread on Facebook has very real implications for the physical world we live in. The Real Facebook Oversight Board hopes that, by drawing attention to Facebook’s blatant inability to govern itself, the company will feel forced to make real change. Given Zuckerberg’s generally hard-headed nature, we’re not too confident it’ll be quite so easy to get through to him. The bright blue body bags might help a little bit, though.