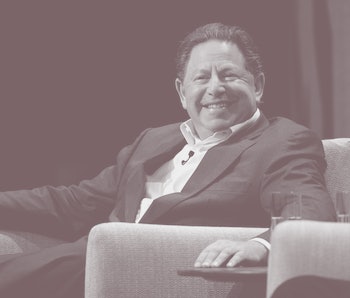 Beleaguered Activision CEO Bobby Kotick is being asked to resign from just about every conceivable angle. Now he says he might actually consider stepping down from his role — but only if he can’t figure out how to “fix” the company culture.

Kotick reportedly told executives in a Friday meeting that he hadn’t completed discounted the idea of leaving the company, according to The Wall Street Journal. He says he’s leaving open the possibility that he’ll resign as CEO if the ongoing misconduct issues at Activision couldn’t be fixed “with speed.”

Calls for Bobby Kotick to leave his position multiplied last week after The Wall Street Journal published an extensive report claiming Kotick had long known about the sexual harassment rampant in Activision’s ranks. Employees planned a walk-out the same day.

Kotick’s official statement at the time called the WSJ report “inaccurate and misleading.” He took no responsibility and refused to step down. Now, with pressure coming at him from all sides, he seems to be reconsidering.

Kotick knew — The longstanding problems at Activision turned particularly ugly this summer after the California Department of Fair Employment and Housing sued the company for fostering a “frat boy workplace culture.” Activision from the start denied the allegations and vowed to do better.

As the head of the company, Kotick always had something of a target on his back as Activision worked to clean up its image. But it wasn’t until last week’s bombshell WSJ report that Kotick’s continued presence at the company became the scandal’s central fight. The report claims Kotick not only knew about the sexual harassment problem at the company — he contributed to it himself and even fought to keep employees who had been accused.

Oh, how the tables have turned — Since the sexual harassment lawsuit and investigation were first announced in July, Activision has stuck to a very simple plan: deny culpability and promise better for the future. Even last week, after the publication of WSJ’s damning report, Activision’s board released a statement saying it “remains confident Bobby Kotick appropriately addressed workplace issues brought to his attention.”

The rest of the gaming world did not have the same confidence in Bobby. The heads of two of the largest gaming companies in the world — Xbox and Sony — expressed dissatisfaction at the way Kotick had handled the situation. That sort of collective contempt is extremely rare in the gaming industry.

Despite Activision’s attempts to outwardly appear calm and collected, the company has (as you might expect) been deep in damage control mode since the report. Kotick reportedly held meetings with executives from both Blizzard Entertainment and Activision Publishing last week. The topic of his resignation was high on the list of topics discussed, according to employees with knowledge of the matter.

With nearly 20 percent of his staff and much of the surrounding gaming industry explicitly calling for his resignation, it finally seems to be sinking in for Kotick that he’s not really wanted at Activision Blizzard anymore... and that clinging on may do more damage. His assertion that he’ll consider stepping down if he can’t “fix” the company quickly is kind of moot now, though. It’s been months since the California lawsuit was filed; it’s been much, much longer since the sexual harassment issues allegedly began. If haste is his measure, Kotick should be ready to resign now.