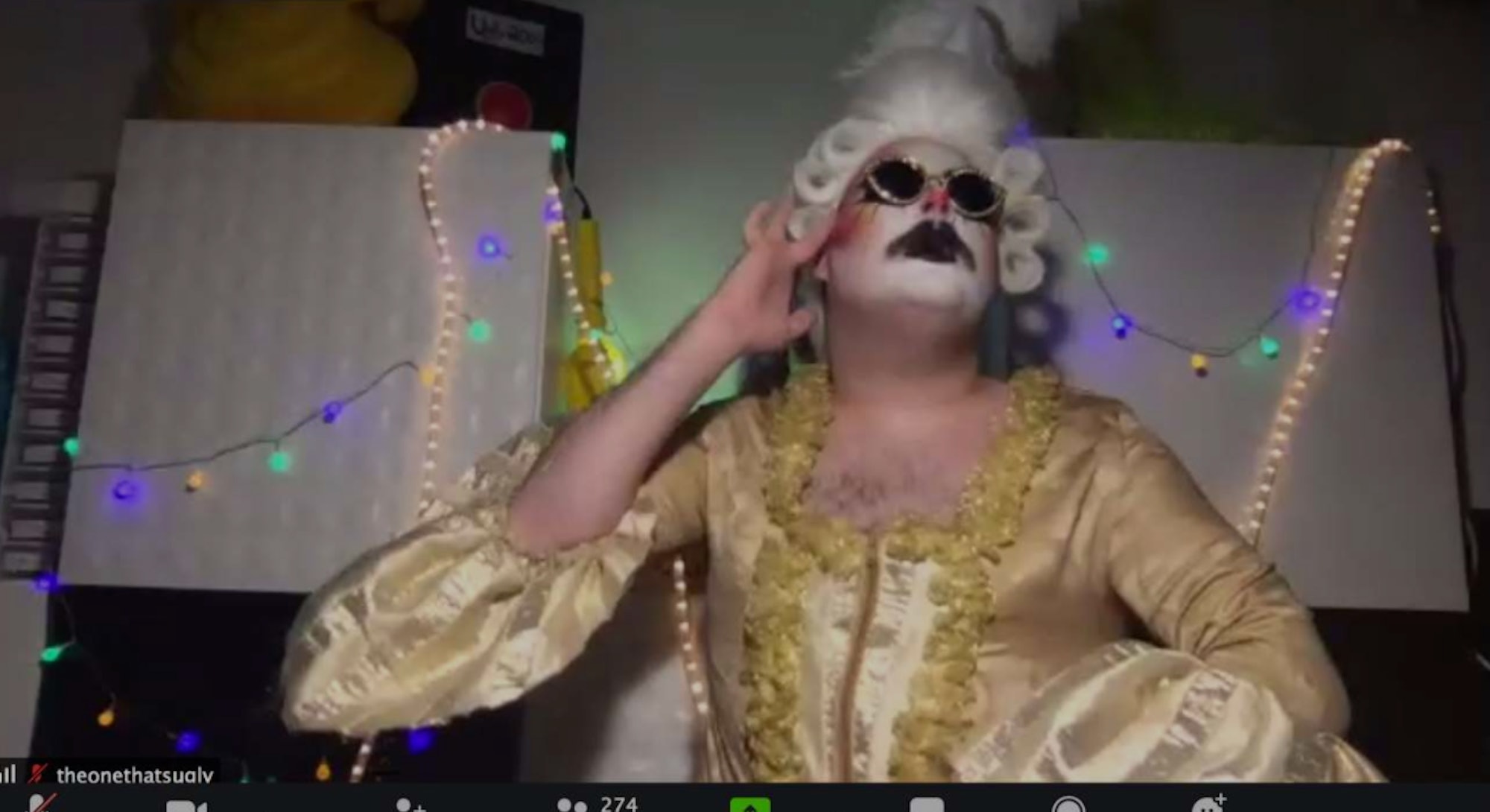 Grab the night’s Zoom code, log in, and lose yourself in a crowd of a thousand other queer people; it's that easy. Maybe make yourself a quick cocktail or roll a joint. Pull up a meme or a custom background if you want. Set your smart lights to strobe. Dance.

If there’s any one thing you need to know about Club Quarantine, it’s that the virtual queer dance party is fun as fuck.

Queer dance parties have long been a force of liberation for the LGBTQ community. On the night of a queer dance party, the dance floor becomes something of a utopia, a promise of freedom amidst a world that is still, for the most part, centered on heteronormativity.

But gatherings in close quarters are a surefire way to spread COVID-19. As such, queer dance parties have been canceled for the foreseeable future — so safe spaces where queer people can forget the world for a little while are in high demand.

Enter Club Quarantine: a digital solution for socially distanced queer connection. Club Quarantine (or “Club Q,” more colloquially) was created by Mingus, Brad Allen, Casey MQ, and Ceréna Sierra on a whim, really — an intimate hangout among friends led to the creation of a Club Q Instagram account and the “foolish” pledge to host a party every night of the quarantine, which they assumed would only last a few weeks.

A month later, the club has nearly 40,000 Instagram followers and is welcoming big names like Charli XCX, Kim Petras, and Tinashe to its lineup of DJs. Local artists and performers are still at the party’s core, though, and Club Q prioritizes queer artists. Every artist is paid, thanks to contributions from attendees and a few sponsors.

Even with an indefinitely long quarantine period ahead of us, Club Q plans to honor its promise to throw nightly parties for as long as we’re stuck inside. “Now we’ll be throwing parties until the day we die,” Mingus half-jokes.

One of the most novel aspects of Club Quarantine is its use of Zoom as its base. The choice to move the party to a video-conferencing app — rather than to a broadcasting platform like Instagram Live — makes the experience infinitely more collaborative. Attendees don’t just watch performers and hosts; anyone is free to share their video. And they do: hundreds of people each night light up the Zoom grid, complete with virtual backgrounds full of memes and pop culture references.

The hosts take full advantage of Zoom’s ability to spotlight individual attendees, temporarily bringing random video streams to the forefront of the party. When people notice it’s their turn on the stage, so to speak, they’re always ready to show off their meticulous outfits and cut loose. Club Q becomes a game not just of seeing but also of being seen — of being acknowledged that you, too, are an integral part of the experience.

Club Q’s founders tell me Zoom became the de facto home for its parties after discovering its enormous capacity for video participants. Zoom’s audio-sharing feature quickly became integral to the party, allowing remote DJs and performers to broadcast their music to the whole party. The founders haven’t dealt with any major technical issues with Zoom, even when the club hits its capacity of 1,000 people (which is fairly often now).

The only time the party ran into trouble was when someone spammed it with hundreds of bot accounts, which crashed Zoom completely. Otherwise, the events have all been smooth, give or take a hiccup when new DJs are learning the system. The organizers work with artists to learn their personal setups and plan accordingly. Worst case, founder Casey MQ acts as Club Q’s resident DJ, ready to jump in and blast Lady Gaga at any time to keep the party moving.

There’s a community forming here: mostly queer and “quite freaky and creative.”

Because the Zoom code is posted publicly, Club Q does deal with the occasional troll, spamming hate speech or links, so its creators have become best friends with Zoom’s banning feature. At least one of the creators is on moderator duty each night, more if a big name is expected to bring in a huge crowd. They’ve also found Zoom’s waiting room to be helpful in screening attendees as they come in the door; it stops trolls from quickly returning once they’ve been kicked out.

“It’s all about learning the Zoom settings,” the creators tell me. “Someone took over the audio and started to play orgasm sounds, so we realized we shouldn’t let everyone have access to the microphone.”

Though they certainly did not expect Club Q to become what it is today, the founders all find themselves now passionate about the ultimately singular queer space they’ve carved out of the internet. They watch each night as queer people around the world flip on their colored lights and find connection. The parties have even begun to extend past the boundaries of Club Quarantine — attendees flirt shamelessly in the chat, and someone almost always throws an after-party on Zoom or Instagram Live.

There’s a community forming here, and it’s one that sticks to Club Q’s roots: mostly queer and still “quite freaky and creative,” the founders say. They feel fortunate for that.

Through this process, the founders have learned just how important this space is. The list of people who can attend Club Q who wouldn’t usually be able to go out to queer dance parties is long: disabled people, closeted people, underage people, people who live in areas without many queer spaces, and people with social anxieties, just to name a few.

And Club Quarantine is already dreaming of a future beyond COVID-19. Its founders want to keep the party going in some form after the isolation period. They’ve talked about throwing hybrid parties, where people can attend either in real life or online. “Probably not eight times a week, but hopefully it will continue once and a while,” they say. “The idea of having a Club Q IRL gets us very excited.”