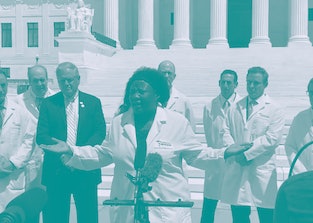 The number of views a fake medical press conference video garnered before Facebook removed it.

Yesterday the President of the United States shared multiple versions of a video showing a group of doctors making false claims about COVID-19. The video quickly went viral and became the second-most-shared video across social media yesterday before it was removed by every major platform. Before being removed from Facebook, it had been viewed more than 17 million times on the platform.

The video — which was sponsored by far-right news syndicate Breitbart — displays a group of actors in lab coats called “America’s Frontline Doctors” holding a staged press conference. The video was filmed in front of the U.S. Supreme Court building in Washington, D.C. in conjunction with Turning Point USA, a conservative nonprofit with strong ties to President Trump.

Trump has shared misinformation before, but this video is an outright attempt to coerce the public into believing dangerous lies about an ongoing pandemic that has killed more than 150,000 people in the United States alone. And the President shared it — not once but multiple times, reaching tens of millions of people in the process.

Facebook, Twitter, and others were unable to triage and remove the misinformation before it had been shared thousands of times. This is an unpleasant reminder that misinformation policies can only do so much to combat potentially lethal lies. The world's largest social media platforms are entirely unequipped to deal with this swiftly growing issue.

Peddling misinformation — During the staged press conference, the “doctors” shared several claims that go against the White House’s official health experts. One woman stated that “you don’t need masks” to prevent the spread of the virus. She also claims in the video that studies proving hydroxychloroquine is ineffective against COVID-19 are “fake science” sponsored by “fake pharma companies.”

These claims are inaccurate and dangerous. After a deep review of scientific data, the FDA determined that hydroxychloroquine — an anti-malarial drug — is ineffective in treating COVID-19. The CDC has long spoken about the importance of wearing face coverings to prevent the spread of the virus.

About those doctors… — Besides the obviously staged nature of the video, even the quickest bit of research shows just how horrifyingly fake its “doctors” are.

Take Dr. Stella Immanuel, for example. She claims in the press conference to have successfully treated “more than 350” COVID-19 patients with a combination of hydroxychloroquine, zinc, and Zithromax.

Immanuel is also a minister who regularly touts conspiracy theories to her followers. Here is an example of topics covered in just one sermon, per the video’s YouTube description: “How long are we going to allow the gay agenda, secular humanism, Illuminati and the demonic New World Order to destroy our homes, families, and the social fiber of America.”

Immanuel claims also that her ministry can help with “deliverance from family line witchcraft.” Last night, after her Facebook page was removed from the platform, she took to Twitter to threaten the company with Jesus’ wrath.

Immanuel claims hydroxychloroquine cures COVID-19. She also claims that gynecological problems are often caused by people having sex with demons in their dreams.

After being viewed more than 14 million times on Facebook it removed the video for “sharing false information about cures and treatments for COVID-19,” a spokesperson for the social network told CNN.

Twitter scrubbed all discernible traces of the video Monday night as well, after it had garnered at least several hundred thousand views across the network. The video was shared by President Trump and his son, Donald Trump Jr. The latter’s account has since been temporarily suspended for sharing the video.

YouTube managed to remove the video from its platform when it had amassed just over 40,000 views, replacing it simply with a message stating it had been removed for “violating YouTube’s community guidelines.”

When does this end? — The spread of misinformation across the internet is no longer simply a problem: it’s a crisis. Facebook and Twitter have become the epicenters of this crisis. For both platforms, their ease of use has devolved into ease of disseminating false information. This issue is only compounded by the use of these platforms by elected officials and other powerful people to communicate official information.

Facebook, Twitter, and other big tech companies like Google have all been forced to show renewed interest in curbing the spread of misinformation due to growing pressure from users and experts alike. Especially when it comes to false claims related to the COVID-19 pandemic. But updated policies and increased enforcement of them hasn’t been enough to stop misinformation from slipping through, anyway.

Design flaws enable virality — The problem is simple, really: social media is built to make it easy for anything to go viral. When misinformation is shared widely, its flames spread more quickly than Twitter and Facebook can handle. Those fires do plenty of damage before these companies have the chance to put them out. And what about the smaller fires that don’t make the news?

Both Facebook and Twitter did eventually catch this mess and take action to quell it. But the video contained advice that, if followed, would undoubtedly make the ongoing pandemic much worse. There are lives on the line here. Social media needs better methods of curbing misinformation and fast. To continue operating with the methodology of “we’ll catch it just as soon as we can” is to assure misinformation will continue to spread.

At the time of writing, the "press conference" video remains available on Twitter via various accounts.