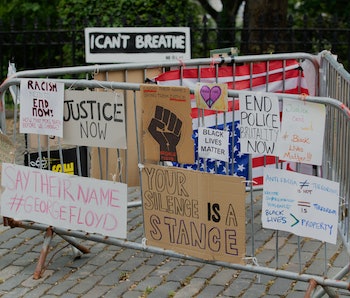 A Twitter account by the name of “ANTIFA_US,” which has been spreading violent rhetoric across Twitter for a few days now, has been linked to the white nationalist group Identity Evropa, according to a Twitter spokesperson. The account has since been suspended for violating Twitter’s policy against platform manipulation and spam, NBC News reports.

The suspension was handed down after a particularly violent tweet began to go viral on the platform. The since-removed tweet called for violence in residential areas with an almost-comically misspelled hashtag.

According to the Twitter spokesperson, this is not the first time the platform has had to take action against fake accounts linked to the group known as Identity Evropa. The organization has also been known as the “American Identity Movement,” according to media collective Unicorn Riot.

As protests against the murder of George Floyd continue across the United States, Twitter and other social media platforms have become the go-to source for live updates and on-the-ground news. That means it’s more important than ever for Twitter to take control of its platform and keep misinformation at bay.

Twitter is finally stepping up — The social media giant has plenty of policies in place to keep Twitter safe and trustworthy, but for a very long time, the company has done a less-than-stellar job at upholding its values.

According to the spokesperson, Twitter has already suspended “several hundred” accounts and is investigating the viral spread of two hashtags that insinuated social media blackouts of protests in Washington, D.C.

Twitter has recently gone as far as rightfully calling out the President’s mail-in ballot misinformation and, later, his inciting of violence against protestors.

Expect more of this — Twitter’s greatest asset — being free and open to the public — is also its biggest weakness. Anyone can open up a Twitter account under whatever name they’d like and just start typing away. Those tweets can then swiftly be spread through retweets before Twitter even knows the fake account has been created.

Now that Trump is actively calling for Antifa to be named a terrorist organization — which, by the way, he’s not legally allowed to do — you can be sure his massive follower base is waiting in the wings for the next opportunity to make the group look bad.

As protests continue in the U.S., Twitter will need to dedicate even more focused energy than usual to its moderation practices. It's also more important than ever for users to stay vigilant when spreading information on social media. Do your research before you hit retweet.