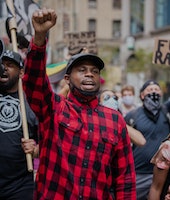 The number of facial recognition searches the NYPD has conducted with the help of Clearview AI.

Despite repeatedly claiming to be concerned for civil liberty groups and privacy advocates, the New York Police Department (NYPD) is actively using facial recognition tech to help it track down civilians. The issue recently got more heated after The Verge reported that the NYPD used facial recognition to find a Black Lives Matter (BLM) activist named Derrick Ingram. Unlike in Boston where such official use is banned, the police force in the Big Apple is a big fan of the technology. The department used facial recognition software to track the 28-year-old protester who is accused of causing hearing damage to an NYPD officer during a protest. The activist allegedly used a bullhorn to shout in the officer's ear.

According to The Verge, NYPD officers surrounded Ingram's house on August 7 and refused to produce a search warrant despite Ingram repeatedly asking them to. The stand-off eventually led to Ingram turning himself in to the police on August 8. In a clip recorded by Freedom News TV, NYPD officers can be seen outside the activist's home, going through a document called "Facial Identification Section Informational Lead Report."

The document shows Ingram's photo, which seems to be taken directly from his Instagram. The department has since confirmed to Gothamist that it indeed used facial recognition to trace Ingram. It called the search a "limited investigative tool" from a "pool of lawfully possessed arrest photos." But it did not clarify whether Ingram's Instagram-sourced photo was a legal part of this hunt.

What the mayor says — The city's mayor Bill de Blasio told Gothamist the department's approach would be "reassessed" and that "we have to be very careful and very limited with our use of anything involving facial recognition."

These words unfortunately contradict the department's actual conduct. The NYPD has been using facial recognition technology to surveil New Yorkers since at least 2011. The official count given by the department is 9,850 requests but BuzzFeed News reported in February the NYPD has carried out at least 11,000 facial recognition searches with the help of the ethically compromised and alt-right endorsed firm Clearview AI.

Ensnaring vocal protesters — Ingram told Gothamist why he thought these activists, himself included, were being targeted. Facial recognition searches ensnared these protesters simply because, Ingram said, they were trying to "deconstruct a system that [the police] are a part of." He also called the entire search a waste of taxpayer money.

It's unclear what Ingram's next steps are, but his Instagram photo could prove to be a pain for the NYPD and New York legislators more broadly. Already facial recognition software is being walked back in the city. If civil liberty groups can demonstrate that Ingram's Instagram photo was not part of the legal search, the NYPD will have directly violated its own very search protocol. And if that can be proven, all pompous claims about respecting people's privacy will come crumbling down — for the umpteenth time.