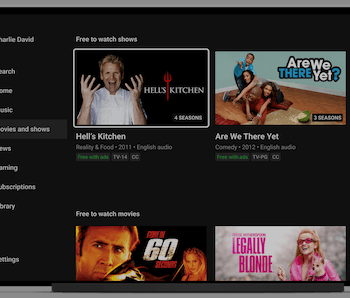 YouTube is actively trying to capitalize on the segmentation of our film and TV viewing options that was ushered in by the age of streaming. U.S. viewers will now be able to watch full seasons of shows like Hell’s Kitchen, Andromeda, and Heartland, among others, on the platform for free, with ad support.

A blog post from the company points out that the YouTube experience is not just concentrated among mobile and tablet users, it’s infiltrating the biggest screen in the house — over 135 million people were accessing the platform on their connected TVs in the U.S. in December 2021 alone.

There were already a handful of movies from production studios and entertainment brands like Warner Bros. and Paramount Pictures available to watch under similar conditions: free but with the addition of ad support. Perhaps YouTube was able to convert some of the audience who was watching this content into paid subscribers to YouTube TV, its live-television competitor. Expanding this particular branch of its services seems to be the focus with the addition of ad-supported, free TV.

Flexibility — YouTube TV was founded in 2017, at a time where cable subscriptions were faltering and the prevalence of streaming was beginning to assert itself as the de facto method for film and TV consumption. Naturally, a number of existing streaming services began to ink deals with a variety of networks, to offer a grab-bag assortment of channels to subscribers for an additional cost. These partnerships centered around live TV such as sporting events and news, but the death of cable wasn’t exactly expedited.

Sure, purchasing a cable subscription is far less common than it was, say, a decade or two ago, but a one-off cable package is hardly the business model anymore anyways. Instead, subscriptions are bundled with internet packages from places like Verizon and Spectrum, which has made it more difficult for a service like YouTube TV to really take off. Throw in the fact that there are a number of competitors like Hulu + (owned by Disney), Sling TV, and Fubo TV, to name a few, that offer a similar service, and we’re talking about a tough market to break into.

Even though you can access live TV (for a price) through just about every streaming service out there, YouTube is betting on the strength of its brand. As mentioned earlier, the platform is being accessed on every device, not just a computer or phone, so why not lean into what the TV has historically signified: a gathering spot to watch live content? Maybe the addition of Gordon Ramsey will be a gateway for people to weigh this option again.