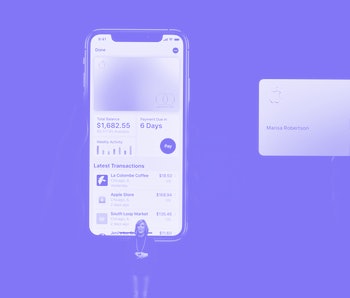 Apple’s campaign for its Goldman Sachs-backed credit card might claim it’s “created by Apple, not a bank” but as Markets Insider reports, the investment bank is keen to remind us who’s actually in charge. Apple might be the face of the product and have its logo on the card, but Goldman Sachs decides who gets a card, is the one taking all the risks, and will go after defaulters if necessary.

GS calls the shots — During an earnings call earlier this week, an analyst asked whether Goldman Sachs would be impeded in pursuing debtors in the case of a recession because of the manner in which Apple has positioned its card as an extension of its friendly, customer-centric brand.

"Whoever lays claim to the creation of the card, there's only one institution that's making underwriting decisions, and that's Goldman Sachs," said Stephen Scherr, the investment bank’s chief financial officer. Which is a diplomatic way of saying, “Hell no.”

You’re not special, sorry — Scherr added that Apple understands how the bank assesses lenders and that “the ultimate decision” sits with Goldman. In other words, if you’re an Apple Cardholder, don’t expect special treatment. You’re still just a line item like any other on Goldman Sachs’ books, even if your card is made of a snazzy titanium alloy.