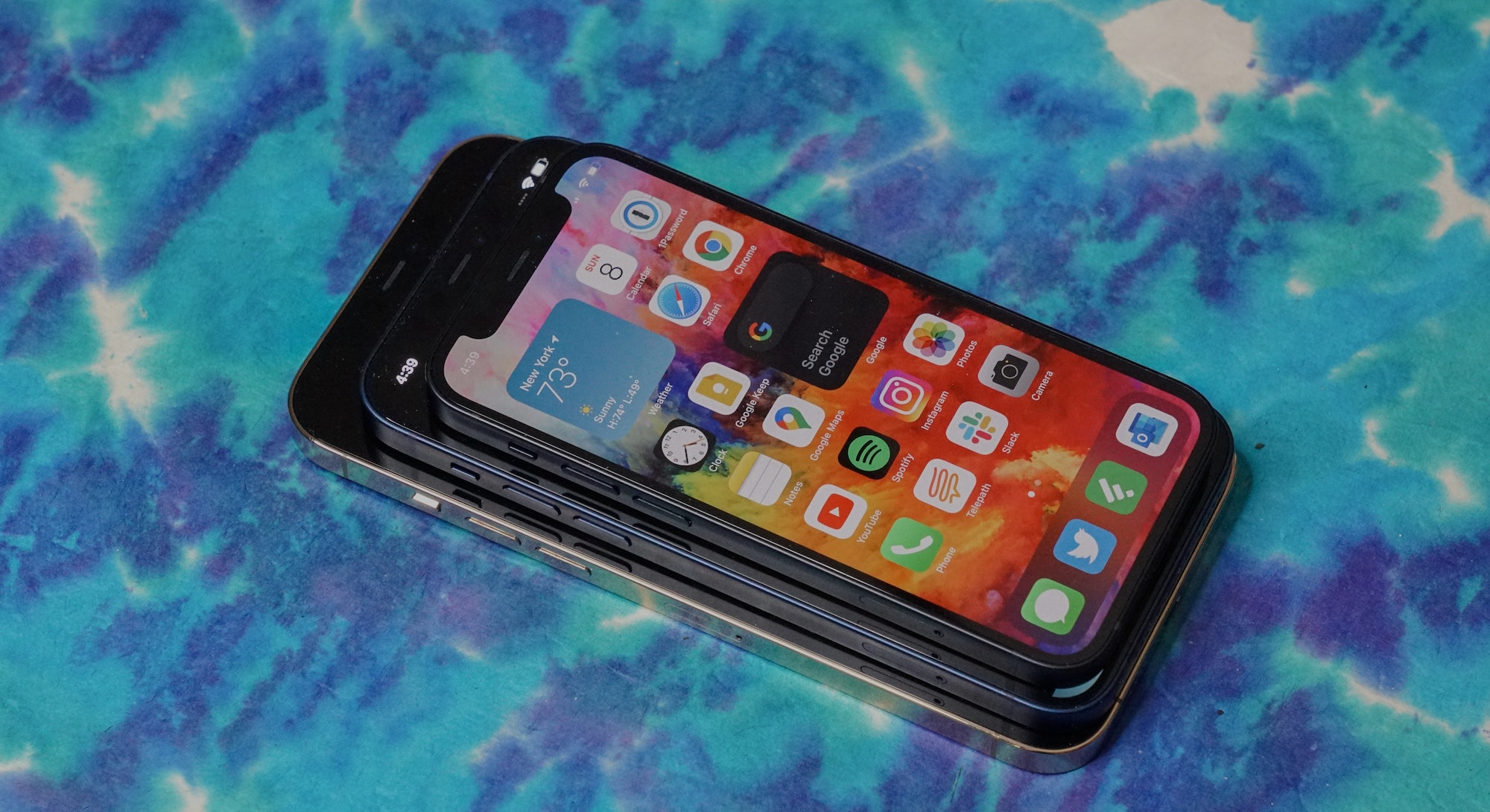 “We also wanted to do something a little different,” said Kaiann Drance, vice president of marketing at Apple, as she flipped open three aluminum briefcases with the James Bond theme song playing in the background. “Something only Apple would do.”

Drance looks at the camera and flashes a confident smile before pulling the iPhone 12 mini out of its adorable little briefcase. (You can read my review here.)

“With its amazing size, it fits in the palm of your hand, while still keeping the expansive edge-to-edge Super Retina XDR display. It’s smaller and lighter than our 4.7-inch models like iPhone 8, but with a larger 5.4-inch display that lets you see so much more.”

On Twitter, my timeline was losing it. Tech bloggers, YouTubers, influencers — everyone was overjoyed that Apple was making a small phone and was leading the return to size sensibility in a big phone world.

Now, not even six months after launching, Ming-Chi Kuo, one of the most reliable analysts reporting on Apple products using sources within the Asian supply chain, says the iPhone mini will be discontinued after this year. If Kuo is right, it’ll confirm what we’ve been suspecting for months: maybe the iPhone mini was a mistake.

Why does the iPhone mini exist?

I could come up with a dozen reasons why Apple made the iPhone 12 mini: a phone for people with small hands; for users who want to use a phone with one hand; a phone that actually fits in your pocket. Maybe it’s a secondary or backup phone, or a device for developing apps. Perhaps, it’s a good phone for kids because of the small size and the lower price. The iPhone 12 mini was the least expensive iPhone with 5G (both mmWave and Sub-6GHz).

Looking at the bigger picture, it’s widely believed that the iPhone 12 mini was supposed to reverse the big phone trend. You know, the one that Apple didn’t start (you can blame Android phone makers for that) but definitely helped popularize and normalize starting with the iPhone 6 and 6 Plus in 2014.

And the even bigger picture: The iPhone 12 mini was supposed to be a technological showcase of Apple’s vertical integration of hardware and software. Who else could cram the power of the A14 Bionic chip, iOS 14, excellent dual cameras, MagSafe charging, and all flavors of 5G into a metal and glass slab this small? Only Apple could.

It all sounded great on paper but…

Despite no longer sharing unit sales for iPhones in its quarterly earnings reports, analyst predictions, component checks in the supply chain, and production at factories, piece together a story of failure for the iPhone 12 mini. Earlier this year, a report from Consumer Intelligence Research Partners (CIRP) said “the new iPhone mini likely disappointed Apple with only 6% of sales in the period” (referring to sales between October to November 2020). CIRP partner and co-founder Mike Levin attributed the iPhone 12 mini’s poor sales to its higher $699 price compared to the $499 iPhone XR and $599 iPhone 11 that Apple still sells in its lineup.

In March, Nikkei Asia said Apple is slashing iPhone 12 mini production by around 20 percent due to weak sales and moving resources to production for the larger iPhone 12 and 12 Pro models.

All these reported production cuts are the result of buyers not putting their money where their mouths are. Talk is cheap and excitement on Twitter didn’t translate to sales in real life. Online, everyone expressed delight at the iPhone 12 mini. In reality, many people don’t want to or can’t return to a small phone. So if the iPhone mini is short-lived, it’s on customers for demanding a small iPhone only to not buy it when Apple finally made it.

Other than a smaller display, there are other valid reasons why people aren’t buying the iPhone 12 mini. For one, the battery life isn’t as long-lasting as other iPhones. Light users will be able to get through a day just fine with the iPhone 12 mini, but if you’re a power user looking to spend just as much time on the iPhone 12 mini as you would on a larger Plus or Max-sized iPhone, the mini’s puny battery doesn’t cut it.

Early on, the iPhone 12 mini’s battery was revealed as its biggest weakness. Defenders rationalized its engineering and design: a smaller phone can only fit a smaller battery. Others blamed the mini’s bad battery life on 5G. This is all true, but it didn’t help that carriers came out with asinine “tips” to improve battery life by suggesting users turn off 5G. It’s impressive that Apple was able to squeeze in proper 5G into the iPhone 12 mini, but maybe just Sub-6 GHz like you see on mid-range Android phones would have sufficed since mmWave is so taxing on battery and so rare in U.S. cities.

Apple took the term “mini” too literally with the iPhone 12 mini.

An iPhone that fits in your pocket and is usable with one hand were once desirable design features but they’re no longer seen as deal-breakers because we now live in Big Phone Reality. Just as 4 inches replaced 3 inches and then 5 inches replaced 4 inches, 6-inch displays are now the norm and there’s no going back. That’s like choosing to spend $300 on a 20-inch CRT instead of a huge 55-inch TV with 4K and HDR and whatnot. Is the CRT good for certain use cases like playing retro games properly? Sure, but the vast majority of people are not going to go back to a smaller screen just to play old games.

In the case of the iPhone mini, 5.4 inches is unfortunately too small in 2021. It’s a phone for ants. It’s the new Zoolander phone. (Sorry, Cheyenne, but I don’t agree it should have been even smaller.) Apple took the term “mini” too literally with the iPhone 12 mini making it even smaller than the iPhone SE 2. In hindsight, maybe Apple should have released a new version of the 5.8-inch iPhone X/XS/11 Pro and given it the mini badge. Or squeezed a 5.6-inch display into an iPhone 8/SE 2’s body. It would have still qualified as a mini iPhone 12, but come with a large enough screen for most people. The larger volume would have also meant more room for a bigger battery.

Tim Cook the operations and supply chain genius is probably upset about the iPhone 12 mini’s sales performance and is ready to pull the plug on the miscalculation. But I think that it’s still too soon to call the iPhone 12 mini a failure because 2020 was not a normal year. Even at the end of 2020, we weren’t certain that 2021 would be any different. The pandemic changed our relationship with technology.

Who needs a pocketable iPhone if you’re not going outside or one-handed use if you’re not standing in line burning time? If you’re working or learning from home, you want a bigger screen. Just like you’d want a bigger screen for TV or games or a desktop monitor instead of a laptop. Who needs 5G if you can’t even connect to a tower to take advantage of speeds like mmWave?

But things are looking up. People are getting vaccinated and there’s light at the end of the tunnel for returning to normalcy. A “mini” iPhone could rebound if Apple makes it just a little bigger, kills off some of the other models (iPhone XR and iPhone 11), maybe removes 5G altogether, and lowers the price. A is, the iPhone 12 mini is too small, but like the iPhone SE 2 which evolved from the iPhone 5S’s 4-inch design to the iPhone 8’s 4.8-inch size), Apple could reboot the iPhone mini into a more palatable device. It is nice that there’s an iPhone that fits almost every hundred-dollar price point, but all this choice is making it hard for the iPhone mini to stand out. It’s time to slim down the iPhone family so an iPhone mini can really shine.