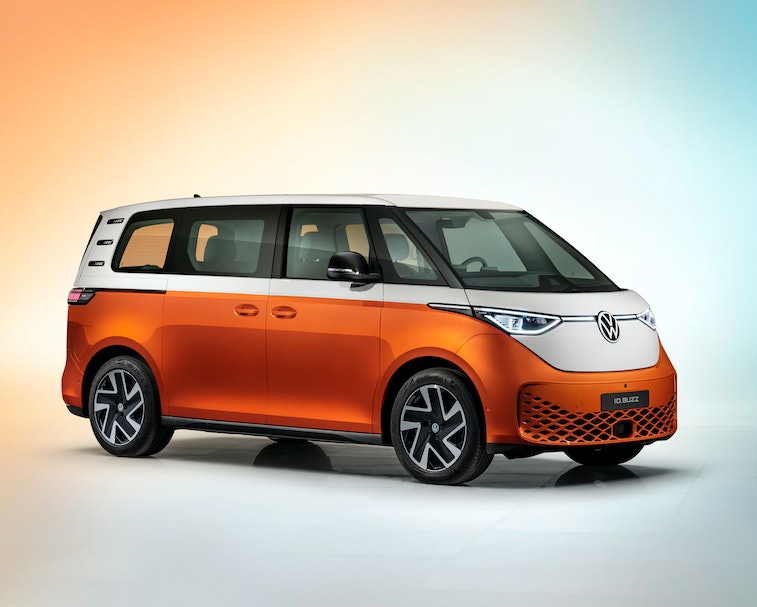 Volkswagen is finally ready to announce the ID Buzz, the automaker’s long-teased EV-update to its classic Type 2 Microbus design. The ID Buzz (and the ID Buzz Cargo, its commercial-focused sibling) are launching in Europe this year before coming to the US in 2024.

The Buzz’s two color-design, white on the top half with a bright color on the bottom half, is a direct reference to VW’s iconic 70s van. Other elements carried over include the general shape — a tasteful mix of boxy and rounded — and the prominently placed VW logo and grill on the front of the car.

The cab of the van comes with separate driver and passenger seats, with a three-person bench seat in the back (with the option for an additional two-person row behind) that can be folded down for more trunk space or used for car camping, all made from environmentally friendly materials. Sliding doors on both sides and a fold-down table for working, playing games, or having meals complete the minivan package.

For final a modern touch, VW is including a 10-inch infotainment screen, multiple USB-C charging ports, and a wireless charging tray.

Battery power — VW says the European ID Buzz will launch with an 83 kWh battery capacity that translates to around 77 kWh of actual use, to power a 201-horsepower rear motor with 229 ft of torque. The ID Buzz isn’t exactly sporty — its top speed is 90 mph — but it seems like more than enough for the families who will presumably use the ID Buzz once it becomes widely available.

VW didn’t share the actual mileage of the launch ID Buzz, but it did say it will support DC fast-charging, and be able to go from 5 to 80 percent charge in 30 minutes.

Availability — There’s no final price for the ID Buzz, but VW will likely share one soon. The European ID Buzz will be available for advance sale in May with the first vans making it into customers' hands this fall.