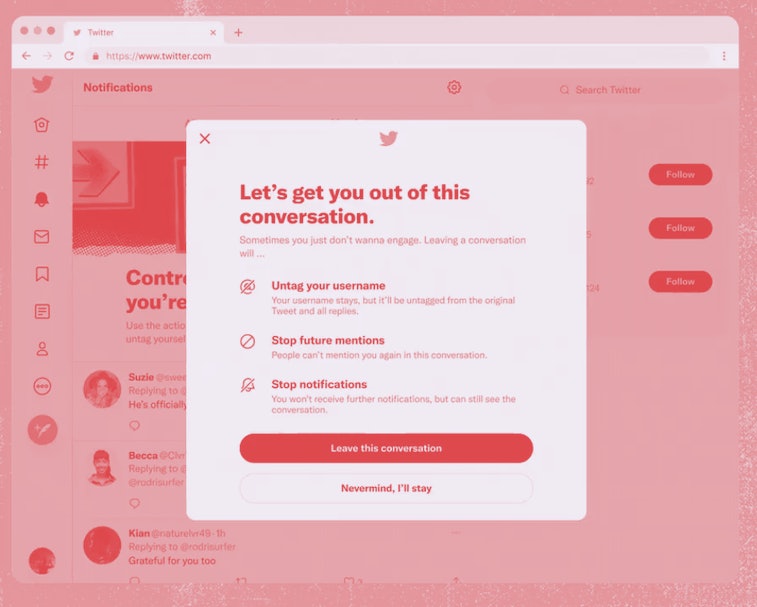 Twitter is experimenting with giving users the ability to ‘unmention’ themselves from tweets, according to a tweet the company shared on Thursday, adding another way to get rid of unwanted notifications.

The feature is only available to certain users at the moment, but it feels like a natural expansion of the privacy and safety options Twitter’s added over the last few years. Welcome changes overall, but also solutions that maybe shouldn’t be necessary in the first place.

Unmentioned — For anyone who already has access to unmentions, removing your online name from someone else’s mouth seems fairly easy. From the three-dot menu of a tweet, just select “Leave this conversation,” Twitter displays a prompt explaining what will happen, and once you’ve confirmed that’s what you want to do, your mention gets turned into normal, not-linked text.

Unmentioning yourself can’t retroactively remove previous notifications you’ve received (based on what Twitter’s shown off so far, at least), but it could spare you a lot of annoyance and harm in the long run.

A healthy platform — Some version of a “Leave conversation” button has been kicking around Twitter’s code for at least the last few months, according to a screenshot shared by app researcher Jane Manchun Wong in February.

It’s yet another safety feature the social media company has promoted during the last few years of rapid product updates. Want to know if you’re entering into a heated conversation? Twitter can do that. Would you prefer to just limit who can reply to your tweets from the jump? That’s an option too. For most types of bad behavior, Twitter seems intent on giving users a way to address it.

That distinction is key, though. Several important safety features on the platform require the person being threatened or harassed to respond, not Twitter. Not to suggest Twitter doesn’t moderate its platform (you can report tweets, after all), but features like “unmentioning” reflect a certain kind of philosophy towards keeping users safe. Kind of a hands-off one.

Why tweet? — Mentions are part of the thrill of Twitter. The idea that people from around the world, who are effectively strangers, could get each other’s attention and participate in the same big conversation (in good or bad faith) is exciting.

For anyone who has a larger following, though, this key feature can become a huge problem. Twitter offers ways to filter notifications, and its more recent safety and privacy options seem designed for users with big follower counts. But at a certain point we have to wonder: why aren’t the parts of Twitter that are easy to exploit for harassment limited by default? It might be because the company is too caught up in viewing them as features, rather than as bugs.