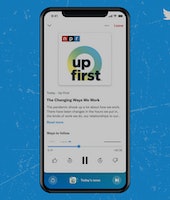 The percentage of U.S. Twitter users that listen to podcasts monthly

Twitter is redesigning the Spaces tab — the section of the app dedicated to Clubhouse-esque live audio conversations — with a new look that puts podcasts side by side with Spaces chats.

The Spaces redesign test is currently being rolled out to a random group of English-speaking users starting today. Whether the features will have more staying power than Meta’s failed Facebook podcasting gamble is unclear.

Personalized Stations — The changes start with how Twitter will organize Spaces content. Now all audio, live or recorded, will be grouped in themed Stations like “News, Music, Sports, and more” according to Twitter. That way you’ll be able to jump into Spaces that are more pertinent to your interests rather than get bombarded with NFT talks whenever you open the tab.

Twitter is also integrating popular podcasts into stations. The company plans on automatically suggesting new podcasts and Spaces based on what audio you engage with, much like it does with tweets on your timeline. You’ll have some say in the matter with thumbs up and thumbs down buttons in whatever audio you listen to, but the controls stop there. At least for this test, a Twitter spokesperson tells Input it’s not including a search function or the ability to add your own RSS feeds.

Recorded Spaces — The same goes for recorded Spaces. While “podcasts in Twitter” made me initially assume the social media company was also planning on getting into podcast publishing, nothing is changing on that front yet. Recorded Spaces, Twitter’s main audio format, are still available for download and can be shared in a tweet or DM, but the better organization in the Spaces tab is the only new benefit for now.

Like PB&J — Twitter is late to the podcast game, but the integration makes a ton of sense. The platform is a popular space for podcast marketing and Twitter says 45 percent of U.S. Twitter users listen to podcasts monthly. Anecdotally, it seems to me like a lot of podcasters are already Twitter-pilled as it is, so Twitter’s just taking advantage of a media-hungry audience that was already using its services.

Clearly, there’s potential for Spaces to become the Anchor to Twitter’s Spotify, but for now, this test seems like a great start. We’ll just have to see whether it’s going to get anyone to spend more time listening on Twitter than they already do in their dedicated podcast app.