“You put a backdoor in your house and anybody can come in. A phone is the same way.” 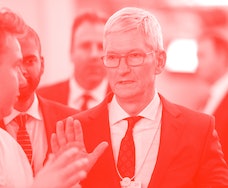 When asked about Apple’s various disputes with the Department of Justice (DoJ) and F.B.I. regarding whether or not phone makers should make it possible to unlock devices when asked to, CEO Tim Cook told a Financial Times reporter the answer is “no,” adding that if “[y]ou put a backdoor in your house and anyone can come in. A phone is the same way.”

Cook made the comments to the FT’s Patrick McGee, who tweeted about it on Tuesday. “In essence the question is should Apple have a backdoor, or the should government, into your iPhones,” Cook said. “And we say no.” Cook has previously said, "there is no such thing as a backdoor just for the good guys."

Apple says no to iPhone unlocking — Apple’s been embroiled in numerous, high-profile cases where authorities have asked it to unlock iPhones and iPads used by suspected criminals and domestic terrorists. The Cupertino-based company has, for the most part, refused, arguing that building backdoors into its products would not only endanger the trust consumers have in it but would undermine the security of all of its devices and increase the chance bad actors — both domestic and foreign — could exploit those built-in weaknesses.

In the wake of a shooting in San Bernadino, California in 2016, Apple was asked to unlock an iPhone that belonged to the alleged shooter. More recently, the company has been pressured by U.S. attorney general, William Barr, the F.B.I, and President Trump to unlock Apple devices that belonged to the Pensacola shooter.

Facebook thinks backdoors are bad, too — Even Facebook, which plays fast and loose with its users’ privacy when there’s the opportunity to make a buck, thinks installing backdoors into hardware or software is a stupid and dangerous idea. Even. Facebook.