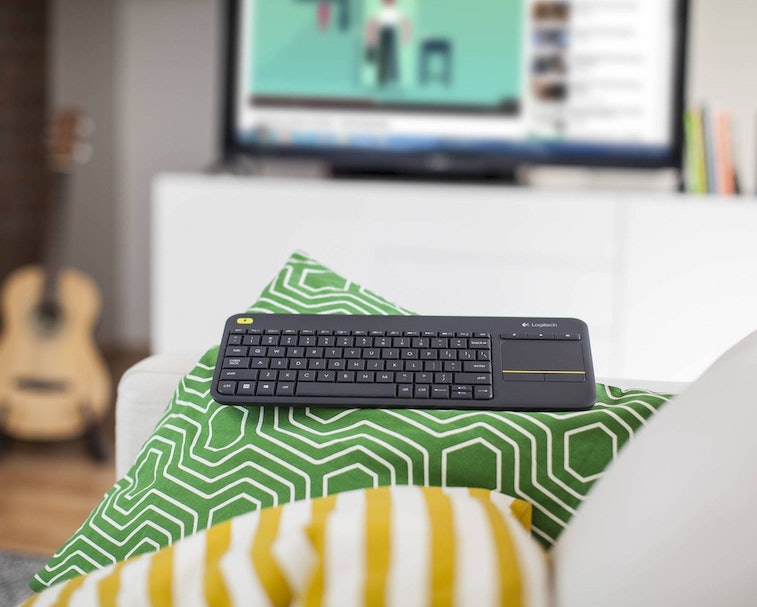 Smart TVs are great, but typing with a remote control sucks, and plenty of people still like using a laptop, desktop, or mini-computer (like a Mac mini) connected to their TV. That usually means getting up from the couch every time you need to line up the next episode, adjust the volume, or do anything else. That, or getting a really long HDMI cable in the case of a laptop. Neither of which is what kicking back is meant to feel like. There's a simple solution, and Logitech's been offering it for years.

The Logitech Wireless Touch Keyboard K400 Plus is the latest version of Logitech's all-in-one keyboard and trackpad, and it's designed with couch-based media consumption in mind. The keyboard comes with a small, USB dongle that offers a wireless range of up to 33 feet, and while it shines with Windows, we've also used one with a MacBook without any complaints beyond a few shortcut keys that didn't work as labeled. You can also plug the dongle into the USB port on your smart TV and use it in lieu of the remote control, which is a godsend.

Make picking the next show to binge or browsing the web from your couch a breeze with this all-in-one, wireless solution.

Tap and go — The built-in trackpad supports taps, but there's also a pair of physical buttons beneath it if you're from the generation who wishes keyboards other than those found on Lenovo's ThinkPad still included a navigation nipple (officially called the "ThinkPoint" or "navigation stick," we're told).

While the keyboard is plug-and-play and doesn't require drivers, there is optional — fittingly named — Logitech Options software that'll allow you to customize keys and touchpad settings if you are using it with a computer.

Long-life, no lights — The K400 Plus is powered by two AA batteries and should last at least a year on a set (Logitech says up to 18 months). That longevity is at least in part thanks to the lack of backlighting. That might be a dealbreaker for those wanting to use it in pitch-dark home theater settings, but we've managed to get by with the glow of the screen to help us find our bearings.

The keys are a little too mushy for us to want to type on them all day, but that's not what we bought it for. We bought it so our lazy posterior could stay put while binge-watching Succession, and for that, it's absolutely perfect. Plus, if we wind up channeling our inner Logan Roy and throw it across the room in a fit of rage, replacing it won't meaningfully affect our bottom line.