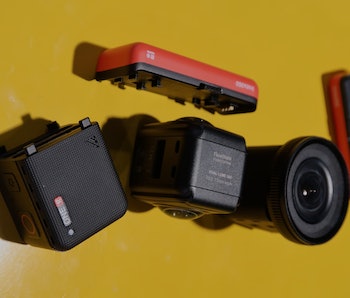 Insta360 has released a new, modular product called the One R that wants to be everything to everyone. Depending on the combination of blocks you attached to the red, battery-packing base, it can be a 4K action cam, a 1-inch-sensor packing 5.3K action cam, or a 360 cam. Whichever combo you choose is waterproof to a depth of 5 meters.

At launch Insta360 is offering three One R bundles. The entry-level 4K Edition that includes the 4K action cam, battery, and controller/screen module costs $300. Add the 360 camera to that with the Twin Edition and you’re looking at $450. If you don’t care about 360 but want the 5.3K 1-inch block, controller and battery, that arrangement will set you back $550.

Flexibility first –– The block also houses a 1.3-inch touch display. It’s a little more fiddly than the larger displays found on backs of a GoPro Hero or DJI’s Osmo Action, but one advantage of the One R’s modular design is it can be attached to face backward or forward. The Osmo Action has a front-facing display, sure, but it’s tiny and doesn’t support touch. Want to shoot 360 drone footage with a DJI Mavic Pro, there’s an Insta360 One R bundle for that, too ($550).

The gold-standard of 360 cams –– Insta360’s One X is a superb consumer 360 cam. It shoots 5.7K video (that’s the combined res from both lenses and senses, not each), offers excellent software stabilization, has an intuitive app, and great battery life. But it’s very specific, and at $400, it’s really expensive. Adding the option to switch to an action cam setup for $50 while still enjoying all the features of the One X takes the edge off that price tag somewhat.

First action hero –– For a lot of buyers, though, we suspect 360-curiosity isn’t going to be the primary driver. It’s going to be the 1-inch cam and the higher resolution, dynamic range and night-time performance a bigger sensor brings. There’s also the added attraction of the “Co-engineered with Leica” stamp of approval (another blow for Huawei, which used to be the sole bearer of that honor).

Finally, Insta360’s packed the One R with some new software smarts. There’s Deep Track active subject tracking, and auto-editing tools like FlashCut, Auto Framing, and CineShots, which should all help newcomers get more satisfying results from the outset.