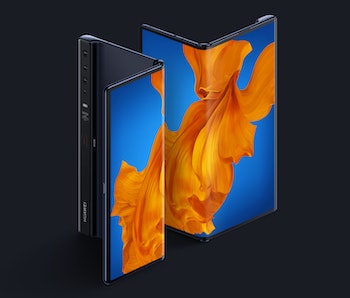 Though we’ve yet to see Huawei’s foldable, the Mate X, in the U.S. — and never will — its successor, the Mate XS, has been announced and will go on sale next month. What’s new? The XS packs a speedier Kirin 990 chip and includes an updated hinge design and hardier display. But, as The Verge notes, there’s something the original Mate had that the XS doesn’t: Google Play Store and the Google apps that come with it.

No warranty in the U.S. either — That’s the sort of omission that renders what otherwise looks like compelling hardware impossible to recommend outside of China. Aside from the lack of crucial apps, U.S. buyers would be faced with no warranty as XDA’s Max Weinbach points out. A warranty is important for any smartphone but it’s absolutely essential for a foldable, where durability remains an inescapable worry.

Can’t I just sideload Google Apps? — You can, but Google warns that it can’t guarantee versions of its apps downloaded from third parties are legitimate. Because uncertified devices like Huawei’s recent ones can’t run Google Play Protect, the search and advertising giant can’t check for problems. Further, to update apps you’ll have to sideload new versions manually, and apps may not run properly because they haven’t been vetted for the unsupported devices.

What’s the story with the new screen? — To the casual observer, nothing changed, there’s a 6.6-inch display when closed that folds open to create an 8-inch tablet, and unlike Samsung’s troubled Galaxy Fold, Huawei’s solution folds back on itself, meaning its display is perpetually exposed. It’s still made out of layers of plastic on top of a flexible, plastic OLED display, but Huawei says it has a new “quad-layer” system that makes the display tougher.

The core specs are largely unchanged — There’s the same quad-camera setup from the original Mate X, 8GB of RAM and 512GB of onboard storage, and the same 4,500mAh battery. The biggest difference remains the absence of Google services in favor of Huawei Mobile Services, which Huawei is attempting to load with alternatives to Google’s apps, but which remains a difficult proposition for those of us accustomed to, and deeply entwined with, Google.

Huawei says it’s planning to sell the €2,499 (~$2,700) device in “global markets” and not just in China like its predecessor, but without Google, we don’t expect there’ll be many people willing to pay almost twice the price of a Galaxy Z Flip for a product without key software and little hope of ever getting legitimate access to it.