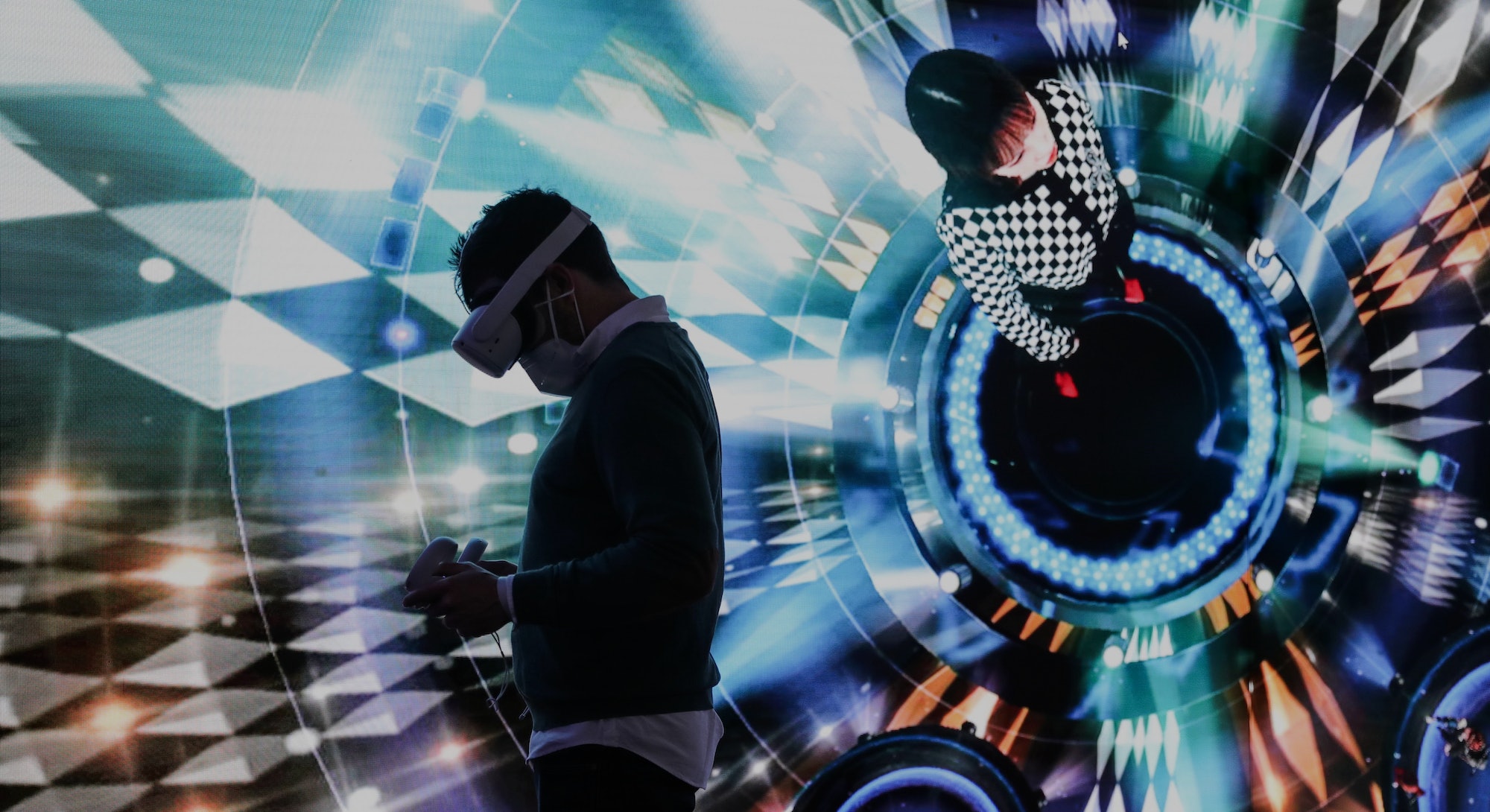 The Lawnmower Man, unlike the Stephen King short story it’s based on, is not about a homicidal satyr.

The film adaptation that turns 30 this month is instead a warning and absurd expansion on what at the time was still a fairly nascent technology, virtual reality. The titular “Lawnmower Man” is experimented on by being thrust into VR simulations that over time, boost his intelligence, give him psychic powers, and ultimately make him a violent megalomaniac.

It’s classic '90s genre fluff. Goofy — gun-toting VR apes are involved — and more than a little offensive viewed in 2022, The Lawnmower Man (check out Inverse’s oral history of the movie) is extra bizarre because of the prominent position VR and its accompanying technologies have assumed in the 2020s.

The world’s biggest social media company, Facebook, rebranded to Meta to focus on VR, AR, and build “the metaverse.” Every major company is rumored to be working on or to have worked on some kind of mixed reality or XR (the blanket term for VR and AR) product. All for the technology that trained monkeys for war in that one movie from the '90s.

The point is, VR has come a long way and it seems like it has even further to go. So here’s an incomplete timeline of its biggest milestones, from The Lawnmower Man till now.

This film is not the first time Stephen King’s work has been butchered in the transition to the screen, but it is one of the notable few times he’s asked to have his name removed twice from a film (once for its theatrical release and once for its home video).

The Lawnmower Man is a bit of a mess, loud and violent, but also “the noise and the lights induce a torpor that is quite soothing,” according to The New York Times. The film’s basic idea that VR could easily become the obsession of a small group of scientists and futurists with too many resources has only proven to be more and more true, though.

The novel that cursed us with the term “metaverse” is also the one that’s seemed to have the biggest influence on Zuckerberg and other current tech CEOs. Snow Crash imagines a dystopian future that’s come to rely on a corporate-controlled (everything is corporate-controlled) virtual reality internet called “The Metaverse” for work, recreation, and plenty of other things in between. The very thing Meta would like to make.

The metaverse of author Neal Stephenson’s novel is deeply stratified in terms of class and not exactly a liberatory vision of the internet or any evolution of it. Naturally, it’s the vision Silicon Valley types have latched on to today. The book is ultimately less about VR than it is about language, but Stephenson coined the word that haunts us to this day.

An example of Nintendo’s experimental approach to console design, the Virtual Boy is one of the earliest consumer products that approach the VR headsets we have today. It’s far from the quality anyone wanted as a device with simplistic red and black graphics in stereoscopic 3D, but Nintendo’s headset was out there making people think about wearing displays to play a game at home. Something they might be doing now with an entirely different headset.

Second Life is an MMO created by Linden Lab, a start-up that entered the scene in 1999 to explore VR. The game is a collection of player-made worlds, a whole little digital universe, with all the real estate and brands that entails. Life happened in Second Life. People got married in Second Life. Plenty of people thought the game would be a big deal, and in some ways, it was.

Since its heyday in the early 2000s Second Life hasn’t been taken as seriously as when it was first released. But when Meta or any other company waxes rhapsodically about the metaverse, the easy proof that their ideas aren’t so revolutionary is a game from 2003.

Palmer Luckey, VR enthusiast, and future Oculus founder worked on an early Oculus Rift prototype after saving money for parts. According to a profile from Eurogamer, that early model had a 90-degree field of view, low latency, and haptic feedback.

Luckey connected to Doom developer John Carmack on the Meant To Be Seen forum over his VR tinkering, an important relationship that would continue into the formation of Oculus and beyond.

Ernest Cline’s New York Times Bestselling Novel is a riff on some of the elements of Snow Crash. There’s another future dystopia that’s also become dependent on VR, this time to escape global warming and widespread economic downturn in the real world. The plot is a mixture between Charlie and the Chocolate Factory and a pop-culture scavenger hunt, only really engaging with the social ills of its VR scenario on the surface level.

Ready Player One might not have the same cultural impact on people’s understanding of VR as Snow Crash, but it has helped to crystallize a relationship between VR and the real world that’s easy to read into Big Tech’s pursuit of VR today. That VR is being pushed as an escape from the dire state of the present-day world. VR as the ultimate tool of escapism.

John Carmack borrowed Luckey’s prototype and began showing it off to the press in early 2012, who accepted it enthusiastically. At E3 2012, Carmack announced Doom 3 BFG Edition will support head-mounted display (HMDs) for VR.

That early prototype was held together with electrical tape but despite its appearance, it’s widely credited with reigniting an interest in VR development. It also served to generate a ton of buzz for Luckey’s Kickstarter project, something he’d been mulling about publicly in the lead up to Carmack’s demos.

The first Oculus Rift developer kit proved to be tremendously successful, raising over $2.4 million on Kickstarter. VR modes in games and VR support also started popping up across the PC gaming space as developer kits made it into backers' hands.

Oculus VR was formed as a proper company in 2012 with Luckey, Brendan Iribe, and Nate Mitchell serving as its founding members. John Carmack left Id Software to become Oculus’ chief technology officer not long after.

In 2014 the company was acquired by Facebook for $2 billion. The social media giant planned to extend Oculus’ reach outside of gaming as the company prepared for “the platforms of tomorrow.” Oculus maintained some amount of independence, partnering with Samsung for the Gear VR, the company’s first version of smartphone-based VR.

“Oculus has the chance to create the most social platform ever, and change the way we work, play and communicate,” Mark Zuckerberg said in Facebook’s press release announcing the acquisition.

Oculus VR would eventually be brought fully into the fold first as Facebook Reality Labs and later just Reality Labs after Facebook’s rebranding.

The original Google Cardboard headset was a gift bag freebie for anyone that attended Google I/O 2014. The rudimentary cardboard headset starts flat and can be folded to hold a variety of different phones for simple VR-like experiences. It even included a lever on the side that simulated touching a phone screen for interactions within supported apps.

Cardboard was the precursor to Google Daydream, and probably still the cheapest possible way to watch 360 videos. Google sold Cardboard on its site until March 2021 before it was discontinued. The device was most commonly used in Google’s Expeditions program for schools. For many people, Cardboard was an intro to VR.

Facebook and Oculus weren’t the only companies exploring virtual reality. In 2015, HTC, a formerly popular Android phone manufacturer, introduced the Vive, a VR headset designed in partnership with Valve.

The original Vive used two 1080p displays, one for each eye, had a 90Hz refresh rate, and used base stations to track movement for room-scale VR. HTC and Valve’s headset would help set the standard for PC VR going forward. It also had a wild bug-eye design.

HTC continued to release VR headsets in the years that followed and Valve eventually released its own VR hardware in 2019 called the Valve Index.

Oculus finally launched a consumer-focused version of the Oculus Rift for pre-order in 2016. The headset was an expensive proposition at $599 because of the pricey high-end PCs it required to work properly.

“Project Morpheus” was introduced as an in-development VR headset for the PlayStation 4 in 2014 and the company finally launched the console VR system in October 2016 as Playstation VR or PS VR.

The PS VR featured an ergonomic, futuristic design, and was partially hampered by a convoluted system of cables and a passthrough box on older PlayStation 4 models. The VR system also relied on a mixture of Sony’s Playstation Move peripherals, keeping it from having the quality of control the Vive or Oculus Rift had.

Getting VR on a console people actually owned was a big deal, and Sony is finally following it up with the PS VR 2, which it revealed the design of in February 2022.

Apple and Google work on VR and AR projects (2016-Present)

Apple is rumored to be working on its own higher-end VR headset in advance of AR hardware sometime in the mid-2020s. Whether Apple’s rumored headset is primarily meant for developers or even ends up launching remains to be seen.

Outside of the original Oculus Rift, the Oculus Quest is probably Facebook and Oculus’ most important product. The standalone VR headset proved that VR apps and games could be compelling even without the processing power of a gaming PC. And that VR experiences could be entirely portable without the trade-offs that phone VR came with.

It also helped cement the Touch controllers as the VR controller design to beat. You’ll see the little loops with handles everywhere, including the Oculus Rift S, the follow-up to the VR headset that started it all.

The Oculus Quest 2 was introduced in late 2020 as the perfected version of the Oculus Quest, with higher resolution displays, a more comfortable fit, support for hand tracking, and a more approachable price. The Quest 2 became Facebook’s vehicle for pushing VR, and thanks to the Link Cable, the company’s preferred way for users to do PC VR experiences once the Rift S was discontinued.

Using the headset for all the applications that Facebook imagines is a bit ambitious (and uncomfortable) but the Quest 2 hit a real sweet spot in making VR completely approachable for the average person.

After the “enterprise metaverse” the only place we can go is up. Everyone has a metaverse pitch, they’re all terrible. The metaverse has become a meaningless term to signal that your company is doing something futuristic. Meta bought a horrifying (and sad) Super Bowl ad for the Quest 2.

After losing a quarter of its value post-VR pivot, Meta is apparently eyeing a return to video products. The circle of life continues.