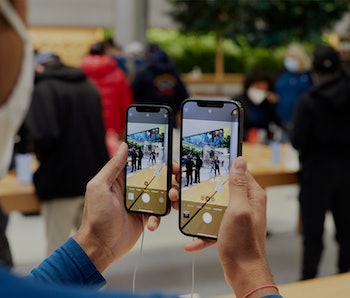 Scholarly research has been devoted to breaking down what we all know to be true about the iPhone; that it’s a total status symbol. According to the National Bureau of Economic Research, no branded item was as predictive of a higher income in 2016 than the iPhone. The 2018 study found that iPhone owners had a 69.1 percent likelihood of belonging to the “high-income” group — beating out an iPad, in second place, at 69.1 percent and an Android, in fourth, at 59.5 percent.

The most obvious reason for the iPhone’s stature is the price. In the years leading up to the study, the iPhone’s base price rose for each new model. Apple’s first iPhone sold for $499, and when the iPhone X released in 2017, it’s $999 price tag was the most expensive ever. But adjusting for inflation, the cost of iPhone ownership has largely remained the same outside of the Plus and Max models. In 2018 dollars, the first iPhone would have cost $605, rising to just $688 for the iPhone 6 and $715 for the iPhone 8, released the same year as the iPhone X.

With the advent of the Plus series, succeeded by the Max, a larger iPhone meant a greater display of wealth. In 2016, you could get a 4.7-inch display on the iPhone 7 beginning at $649 or size up to 5.5 inches on the 7 Plus for $120 more for any given amount of storage. The biggest iPhone we’ve seen to date came on the iPhone 12 Max, boasting a massive 6.7-inch screen and a starting price of $1,099.

But then Apple introduced the iPhone 12 mini and flipped the script on the whole idea of the biggest phone being the best phone. Instead, it packed many (but not quite all) of the leading features from its larger siblings into a smaller and humbler package. This begs the question: Can the iPhone 12 mini still be considered a status symbol in the same way the iPhone 12 Pro Max is?

Of course the answer is subjective, but for me its been the grail that those giants are to others. It’s right up there with the MM6 Maison Margiela x The North Face Denali fleece and Issey Miyake pleated pants as one of my favorite things I’ve purchased in the last year. (The seafoam green is also the same color as the pleats, satisfying my appetite for what I believe is the most calming and beautiful shade that exists).

It’s been less than a month since I got the mini, and already people in my family have asked how old the phone is, with the implication being that, because it’s small, it must be old and inferior.

A small phone with BDE. For once, the latest and greatest iPhone tech isn't housed in a behemoth. The iPhone 12 Mini will fit even the most Trumpian of hands — without any of his desperation for attention.

I love these interactions. The mini finally delivers what I’ve been wanting from Apple ever since it started blowing up iPhones to near iPad levels — a phone that doesn’t monopolize my pocket, a phone that I can hold in my tiny hands. For once, I’m no longer an overt carrier for the company’s latest and (physical) greatest.

The iPhone 12 mini isn’t so small it’s invisible, and to some it isn’t small enough. Our own Cheyenne MacDonald argues the 12 mini should be even smaller, and by no means is the phone perfect. But for people like me, the Mini is just an iPhone, as inconspicuous in a crowd as it is in my pants. My pockets now have room for other stuff, and those who gaze upon me may look at something else — perhaps my fit — before noticing my phone. If they’re more hip to Apple’s latest developments, they’ll see it for what it is. Like the way wearing rare sneakers used to be before the culture went mainstream, if you know, you know.