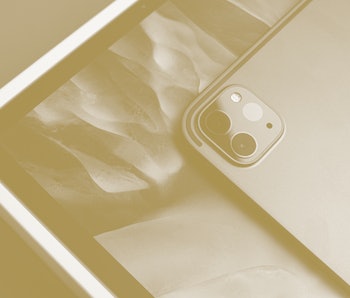 The fourth-generation tablet, released last month, contains a new security feature designed to protect the microphone against attackers. That's according to the company's Platform Security document, spotted by 9to5Mac Thursday, which explains that the new tablet is designed to disconnect the microphone at the hardware level when a supported iPad case is attached and closed.

iPad models beginning in 2020 also feature the hardware microphone disconnect. When an MFI compliant case (including those sold by Apple) is attached to the iPad and closed, the microphone is disconnected in hardware, preventing microphone audio data being made available to any software—even with root or kernel privileges in iPadOS or in case the firmware is compromised.

It's the sort of security feature that could be ideal as Apple prepares for the future of computing. The tablet was unveiled last month alongside a new Magic Keyboard, featuring a trackpad that makes the iPad into something closer to a laptop. This accessory, paired with iOS 13.4 trackpad support and a marketing campaign focused on "what's a computer," means more consumers could find the iPad meets all their computing needs in a more user-friendly package. The new feature, already present on recent Mac laptops, suggests Apple will offer similar levels of security to make the iPad suitable as a computer replacement.

The upgrade builds in a security feature already seen in recent Mac computers. Portable Macs featuring the T2 security chip will disable the microphone when the lid is closed to prevent any software at all from interacting with the microphone. The system does not cut access to the camera, because as the document explains, there's not much point if the lid is closed and the camera can't see anything.

The change comes as part of an otherwise quiet iPad update. Although it was nearly two years since Apple last updated the iPad Pro, hands-on trials suggest the new tablet makes very few changes. Storage capacity has increased, RAM has been boosted for some models, there's a second ultrawide camera lens on the rear and a lidar scanner has made its debut. But the lidar scanner's usefulness is limited at this stage due to a lack of software support, and the A12Z chip is only a marginal improvement from the third-generation tablet's A12X. The Magic Keyboard and iOS 13.4 are also compatible with the third-generation iPad Pro.

But with MacBook-level microphone security making its way to the iPad, Apple seems to be taking security seriously with its future-facing computer.