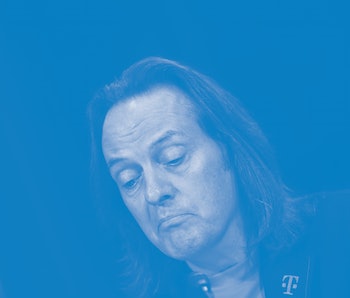 T-Mobile claims that it’s the first company to launch a nationwide 5G network in the U.S., following efforts to expand the service to major cities in the country. It leads primary competitors AT&T and Verizon, which have been deploying more limited 5G networks across America, targeting a smaller set of customers. The service covers 200 million people in total, spanning more than 5,000 U.S. cities and towns, and will launch on December 6.

Hold your horses — This might not be the 5G you think it is. As Digital Trends puts it, “T-Mobile specializes in ‘low-band spectrum’ 5G — a band of 5G that’s excellent for covering large areas and penetrating walls.”

AT&T and Verizon, on the other hand, have deployed 5G networks with “high-band spectrum,” which has a smaller range but faster speed of up to 10Gbps. In comparison, T-Mobile is promising 5G speeds that top out at up to 100Mbps — more like really fast 4G LTE speeds instead of the game-changing blistering fast 5G everyone's boasted about.

In true T-Mobile fashion, CEO John Legere took weirdly populist shots at the competition in the company's press release. “While Dumb and Dumber focus on 5G for the (wealthy) few, launching in just a handful of cities — and forcing customers into their most expensive plans to get 5G we’re committed to building broad, deep nationwide 5G that people and businesses can access at no extra cost with the New T-Mobile.” Dumb and Dumber referring to AT&T and Verizon, of course.

Slow and steady — T-Mobile may be the first with wider 5G coverage in the U.S., but if their network doesn’t provide what consumers are looking for — wickedly fast data speeds — it doesn’t seem like there’s much of a point of upgrading yet. Even T-Mobile seems to agree. Its promotional material hints at “early adopters” and promises speeds will increase “over time.” So, yes, it’s exciting that 5G is here, but is it really meaningful 5G if you can't do things like download a high-resolution 4K movie in like a few seconds?