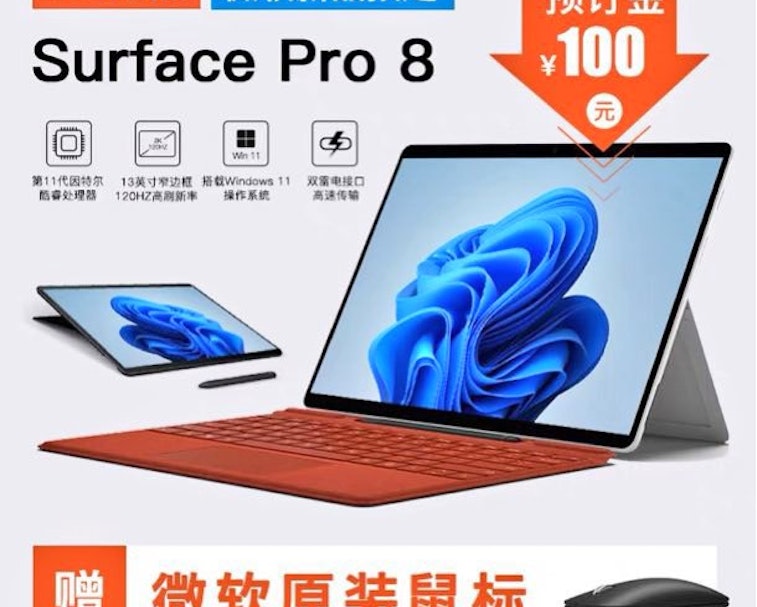 With Samsung and Apple devices already announced this year, leakers have turned to spoiling Microsoft’s Surface event that’s scheduled for September 22. While we’ll know everything this Wednesday, a leak from user @Shadow_Leak on Twitter shows a screenshot with loads of alleged information on the Surface Pro 8. The Verge has corroborated the leak with its own sources.

What’s the screen size and refresh rate for the Surface Pro 8?

The new Surface Pro 8 is reportedly getting a bigger display than the Surface Pro 7, jumping from 12.3 inches to 13 inches. It’s not a gigantic difference in size, but every inch matters. And because the Surface Pro 8 reportedly has much thinner bezels than before, you’ll be able to see even more of the screen.

A bigger screen is always nice, but a fast refresh rate can be just as important. The Surface Pro 8 is said to have a 120Hz display, which would make games and other software appear much smoother and responsive. It’s not clear if the new display’s refresh rate will be adaptive, similar to Apple’s ProMotion, which is able to change refresh rate based on an activity to conserve power.

What OS will run on the Surface Pro 8?

Windows 11 was announced earlier this year, so of course, Microsoft’s latest computers should run the new operating system. The official release date for Windows 11 is October 5, roughly two weeks after the Microsoft Surface event so it’s likely it’ll ship with Windows 11 and not Windows 10. Windows 11 will look much different than before, and, among other features, it’s getting support for two Xbox Series X | S features that improve PC gaming.

What kind of CPU will power the Surface Pro 8?

According to the leak, the new Surface Pro 8 hybrid laptop should come with Intel’s latest 11th-generation laptop CPUs. The Tiger Lake CPUs have been around since last fall, so it’s no surprise to see their availability on new Microsoft Surface devices. If we take a look at the Surface Pro 7, the option for either an Intel Core i3, i5, or i7 might be in the cards, though we’ll have to wait to find the exact models of each chip that will be available on the Surface Pro 8.

What kind of GPU will the Surface Pro 8 have for gaming?

Intel’s steadily been making gains with its GPU business, most recently announcing their commitment to making gaming-dedicate GPU’s to compete with Nvidia and AMD. The Intel Arc GPU is not planned until next year, but the XE architecture it’s based on can be found on higher-end 11th-generation Intel chips. The Intel Iris Xe integrated graphics are much better than Intel’s UHD integrated graphics, but don’t pack enough power to play AAA titles on ultra settings.

However, for free-to-play style games, which typically require less computing power, the Iris XE graphics should be enough. Though you’ll probably have to lower graphics settings and settle for 60 fps gaming, it’s better than nothing. The graphics should also be useful if using creative software, such as Premiere Pro or Photoshop, which can take advantage of hardware-accelerated rendering to improve rendering times and put less of a burden on the CPU.

What kind of storage will the Surface Pro 8 come with?

Once again, the leak has revealed the new Surface Pro 8 could make use of replaceable SSDs. With M.2 NVMe SSDs quickly becoming the standard thanks to their fast read/write speeds, being able to replace the drive with a new one down the road would be very user-friendly. The going rate for top-shelf SSDs, such as Samsung’s 970 Evo Plus, is still steep, but that could change in a few years and make it more affordable to upgrade to a larger, faster drive in the future. Unlike MacBooks that can’t be user-upgraded at all, if Microsoft goes this route for the Surface Pro 8, it could be a major selling point.

What I/O will the Surface Pro 8 have?

The Surface Pro 8 will reportedly do away with USB-A ports and replace them with two Thunderbolt USB-C ports. It means you’ll need to get a dongle to add more functionality, though. Ugh. Though based on USB-C, Thunderbolt ports are faster and able to transfer a maximum of 40Gbps, which is twice as fast as USB-C.

Price and availability of the Surface Pro 8?

The leak did not disclose either the release date or the price for the various Surface Pro 8 models. However, taking a look at last year’s Microsoft event in May, the devices announced were available to pre-order immediately and launched just a few weeks later. With the event taking place this Wednesday, September 22, and the official Windows 11 release date on October 5, it’s possible we’ll see the Surface Pro 8 come out sometime between those dates. And the price? Well, the Surface Pro 7 debuted at $750.