Spotify is buying 'The Ringer' to further swell its podcast offerings

“With The Ringer, we’re basically getting the new ESPN.” 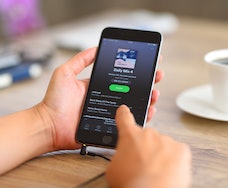 The rumors were true: Spotify is buying sports and pop-culture network The Ringer and its accompanying websites for an undisclosed sum. Aside from generating $15 million in revenue in 2018, The Ringer comes with founder Bill Simmons, who’s got a proven track record making audience-attracting pods — something that could be just as attractive to the streaming giant as its new acquisition's existing 30 shows.

Spotify’s been shopping like crazy — Last year Spotify acquired podcast businesses Gimlet Media, Parcast and Anchor for a combined outlay of approximately $400 million, and it’s been working on targeted, dynamic adverts for podcasts to help it capitalize on its growing roster of podcast properties.

“With The Ringer, we’re basically getting the new ESPN,” Daniel Ek, Spotify’s CEO told Recode in an interview. In the same interview, Ek called Simmons “a talent magnet.” Simmons and his 90 staff members are all being kept on by Spotify, and we expect you’ll still be able to get The Ringer’s content on platforms other than Spotify, like you can with Gimlet’s shows.

Spotify’s now a web publisher — One of the most interesting takes from Recode’s story is that the acquisition of The Ringer effectively makes Spotify a web publisher because of the various websites it suddenly owns. That also gives the streaming service some new video-making talent, which it could potentially harness for new features it’s been testing like an Instagram Stories-like feature.

There are going to be casualties — Spotify's growing popularity along with fierce competition from Apple Music have meant consolidation in the streaming space that’s killed smaller services like 8tracks and made growth and sustainability difficult for the likes of Pandora and SoundCloud. We don’t expect that to change any time soon, but we do expect Apple to start looking for new ways to monetize its podcast business, and new features from both behemoths to attract new subscribers.

Spotify’s shown it’s not afraid to throw new features against the wall and see which of them stick. It launched playlists for pets last month, and has launched a standalone app for children so their parents’ accounts and listening history needn’t be sullied with 50,000 instances of ‘Baby Shark.’ The company’s origin story is also coming to Netflix this year. If ever there’s a sequel, it’s going to have to have a whole act on the podcast wars and Spotify’s growing role in them.