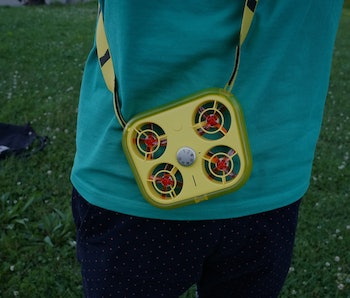 Snap might not be making a sequel to the Pixy drone after all. The Wall Street Journal reports that the Snapchat maker is “sunsetting future development” on its easy-to-use drone, seemingly in part of a broader effort to cut costs after the company’s second-quarter earnings.

Snap isn’t alone in suffering under the current economic downturn — or the long-term effect Apple’s App Tracking Transparency has had on the mobile advertising business — but its struggles with hardware are somewhat unique. Whether it’s the Spectacles camera glasses or now the Pixy, Snap’s experimental hardware hasn’t really caught on in the same way other new hardware has.

The OG lives on — Snap CEO Evan Spiegel reportedly shared the news that Pixy development was ending as part of a regular Q&A series with staff. Just four months after the drone was introduced in April, it’s now meeting its end as part of a “broader reprioritization of company resources,” WSJ writes.

Spiegel was the first to tease possible future Pixys (Pixies?) in an interview with The Verge, noting that Snap even underestimated how many people would want to buy the first version. “Maybe we would make more with version two if people love the original product,” Spiegel explained.

After the relative failure of the Spectacles from a sales perspective, the Pixy seemed like a corrective product people would be more interested in. “After a couple versions of camera glasses, it just becomes very clear that the market for camera glasses is actually very small and constrained to people who want that first person POV,” Spiegel told The Verge. “I think the market for Pixy is bigger.”

Input reached out to Snap for comment on the WSJ report and to see if the current Pixy will still be for sale. Snap declined to comment. The original Pixy is still currently available for purchase.

Software success — Despite hardware road bumps, Snapchat’s users continue to grow — just not as fast as Snap or investors want — and the company’s new $3.99 subscription service, Snapchat+, has already had its first big success. Snap reported it had over a million subscribers in the first six weeks the subscription was available.

That’s a healthy collection of subscribers for what amounts to Snapchat “power user” features like seeing who’s rewatched your Story, and another meaningful indicator people are using Snapchat

A Camera Company — Snap software continuing to succeed while its hardware struggles puts the company in an odd position. Learning through making hardware, and ideally selling that hardware for a profit, is a big part of its push for an augmented reality future. But if no one’s buying it, or it’s too expensive to develop in the first place, that’s kind of a problem.

Snap thinks of itself as a camera company. That might have seemed premature when it was only developing an app, but it’s since backed that up with experimental toys, and plenty of exciting acquisitions. It’s ironic then, that it maybe got it right the first time. If Google’s proved anything with its Pixel phones, it’s that the most important camera you own is the software that processes your photos, not the physical hardware itself.

For the immediate future, software is working for Snap, and it seems like that’s what it’s going to be selling.