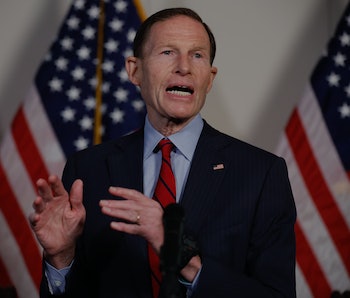 On Wednesday, two senators — Richard Blumenthal (D-Conn.) and Marsha Blackburn (R-Tenn.) — introduced a bill that attempts to monitor how children spend time online, specifically in regards to social media platforms. The Kids Online Safety Act would require companies behind products like Instagram and TikTok to provide tools for parents and children under the age of 16 to, well, keep them safer on the internet.

These tools include providing ways for parents to measure how much time their kids are spending online and to opt out of autoplay features that aim to extend users’ screen time. Additionally, tech companies would be required to offer parents and minors the ability to tweak existing recommendation algorithms — after all, YouTube’s recommendations can sometimes veer towards the extreme side of things.

“What we’re doing in this bill is empowering those children and their parents to take back control and the power over their lives online,” Blumenthal stated during a news conference following the bill’s unveiling.

A long time coming— The Kids Online Safety Act arrives following many months of scrutiny towards Silicon Valley. In September of last year, damning evidence leaked by Frances Haugen detailed the adverse effects of Instagram on young women. Haugen’s internal documents showed that Facebook was aware of the toll that its services take on the country’s youth but chose to downplay it publicly.

The bill would also make it mandatory for companies to actively work against the promotion of negative behaviors like self-harm, eating disorders, and bullying by offering more transparency through the creation of a program that would allow researchers to access company data.

Keeping an open channel to independent research could potentially serve as a form of checks and balances for a process that is generally opaque to the public. This sort of transparency has been encouraged by Haugen, who described the company’s algorithms as “a black box.”

This new bill also follows Blumenthal’s efforts to undermine encryption; the EARN IT Act, which was first introduced in March, 2020, aims to establish backdoor access for federal use within any customer-facing products that are encrypted. Activists worry the EARN IT Act will disproportionately affect LGBTQ communities.