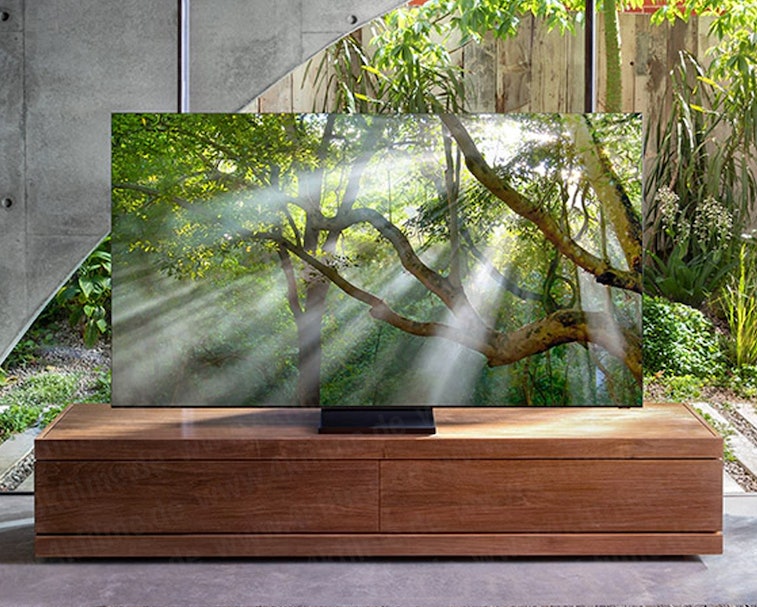 Samsung’s expected to show off a nearly bezel-free TV at CES in Las Vegas next week, and as tends to be the case with such things, some of the details have leaked. German website 4KFilme has an image of the display, which seems to show only a small chin on the bottom edge, along with the curved stand we’ve seen on some previous models that lends itself well to the addition of a Samsung soundbar.

Probably only 8K and 65-inch –– Being 8K sets, we wouldn’t be surprised if the new bezel-less TVs are limited to 65-inch displays or larger. Because, much like 4K doesn’t make that much sense on a 32-inch screen where you can barely notice it, 8K is a little pointless on a 40- or 50-incher.

Definitely pricey –– Rumors suggest the new display could be called the Q900T or Q950T, but whatever it’s called, you can bet it’s going to be pricey. And with precious little native 8K content out there, you’d still be pretty mad to buy one, unless you’re eager to show off your new bezel-less set with sample 8K videos of brightly colored macaws in forests.

We’ll have more information on Samsung’s new TVs, along with LG’s updated rollable OLED one from CES. And hopefully we'll find out more about Samsung's curious NEON project that it swears has nothing to do with Bixby.