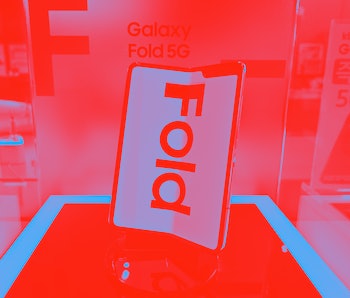 Recent leaks suggest Samsung’s working on its own clamshell foldable to rival Motorola’s Razr, and that the device will launch with the Galaxy S11 range (or whatever it ends up being called). A new report from the Yonhap News Agency, however, claims the foldable will arrive in February, ahead of the update to Samsung’s flagship line.

Samsung will reportedly unveil the foldable phone at an event in the U.S. in mid-February and it could go on sale immediately. It’s expected to include a more durable display than the first-gen Fold. If that’s the case, you can bet we’ll see more leaks in the weeks to come. Samsung may be good at a lot of things, but keeping its devices under wraps until launch isn’t traditionally one of them.

A head-start on the competition — After exhibiting initial design flaws with the first Fold, we're expecting the company to tread carefully this time around and not rush anything to market. But launching its clamshell foldable before Mobile World Congress could prevent Samsung’s release from getting lost in the inevitable noise of the mobile show. Moreover, it could mean beating Motorola’s delayed and Huawei’s (likely) doomed folding offerings onto shelves.