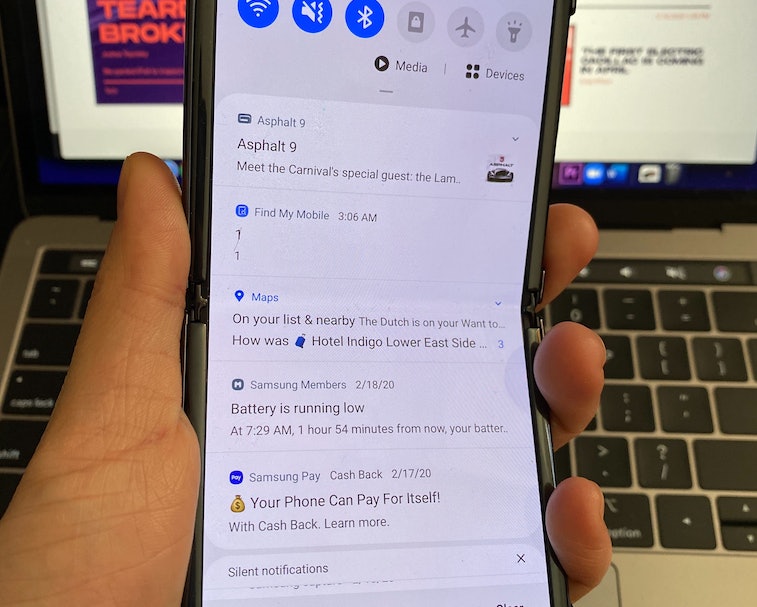 If you own a Samsung smartphone odds are you got a strange notification overnight titled “Find My Mobile,” with two 1s beneath it. The notification came from Samsung’s app of the same name and was received on a huge selection of phones from the Galaxy Note, S and J ranges. Multiple members of the Input team received the notification, two on Note 10 phones and one on Samsung’s brand new Z Flip.

According to Neowin, the notification was received by Samsung owners in multiple countries, including the U.S., Canada, U.K. New Zealand, South Africa, and Singapore. Samsung's U.K. help account tweeted about the incident, saying it “occurred on a limited number of Galaxy devices,” and that the notification was “sent unintentionally during an internal test.” Which doesn’t tell us very much, and hasn’t reassured everyone.

Nothing to fear except fear itself — Understandably, some users were freaked out getting an unexpected notification from an app that’s designed to not only help find a mislaid phone but potentially lock it down or wipe its contents remotely. Some took to Twitter to ask whether their location or any other data had been compromised in the process, so Samsung may need to come up with a more detailed explanation if it’s going to reassure users nothing untoward went down.

Earlier this week Samsung also came in for a tongue-lashing for serving ads in the phone app on the folding Z Flip and for weakening the security of Android on some of its devices by messing with the kernel. The Korean company hasn’t had the best week… but it’s still been way better than Motorola’s. So, there’s that.