Samsung's cutting-edge PCIe 5.0 SSDs are here and they're ridiculously fast 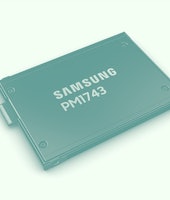 Samsung has announced its latest super-fast SSDs built with the PCIe 5.0 standard, clocking in at nearly two times the speeds enabled by its previous (and still fairly cutting edge) PCIe 4.0 SSDs.

While the jump is exciting, there’s just one catch: they’re really only designed for enterprise servers, meaning you shouldn’t expect to be using its next-gen SSDs for faster loading times in GTA Online, at least for the time being.

Double the speed — Samsung’s latest SSD may be reserved for data centers and corporations but we can still get excited about these impressive specs. The new PM1743 offers a sequential read speed of up to 13,000 MB/s and a random read speed of 2,500K IOPS. Those read speeds make the PM1743 almost twice as fast as Samsung’s previous PCIe 4.0 SSDs.

The PM1743 also has a sequential write speed of up to 6,600 MB/s and a random write speed of 250,000 IOPS. Again, a huge upgrade from its predecessors. Samsung also said its new SSD has better power efficiency of up to 608 MB/s per watt. The improvement is a 30 percent increase in efficiency and could lower operating costs and reduce the carbon footprint of server and data centers.

Since these SSDs are aimed at enterprise servers, they also feature a couple of security features. According to Samsung, the PM1743 will be the industry’s first PCIe 5.0 SSD with dual-port support so the connections are backed up. The SSD will also be embedded with a security processor and a Root of Trust to better protect important data.

PCIe 6.0 already? — Samsung is offering their PM1743 SSDs in capacities ranging from 1.92TB to 15.36TB and in the traditional 2.5-inch form factors or the 3-inch EDSFF configuration. Samsung said they’re currently delivering samples of their ​​new SSDs to certain clients for joint development, and believe it or not, the company is already expecting to mass produce the SSDs in the first quarter of 2022.

Samsung isn’t the only manufacturer to jump on the push for PCIe 5.0. Kioxia announced in November its PCIe 5.0 SSD offering that’s also aimed at enterprises and data centers. More recently, Adata teased two of its PCIe 5.0 SSD prototypes that can hit sequential read speeds of 14,000 GB/s.

But, Samsung is already looking ahead, as Yong Ho Song, executive vice president and head of the Memory Controller Development team at Samsung Electronics, said that work on PCIe 6.0-based products is already underway. Looks like long loading times won’t stand a chance in the future.