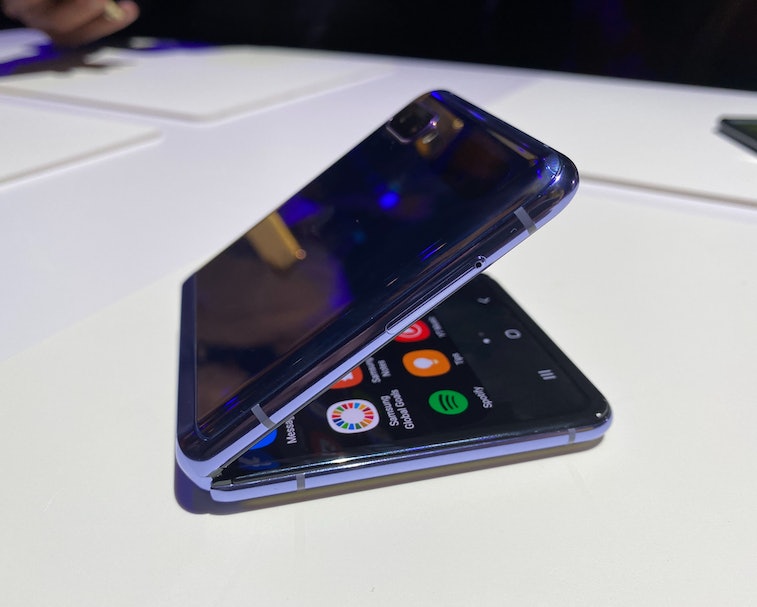 Surprising absolutely nobody, Samsung officially announced the Galaxy Z Flip, its second stab at foldable phone, at its Unpacked event in San Francisco on Tuesday.

The Z Flip is markedly different foldable than the Galaxy Fold, which launched to lukewarm reception and a whopping $1,980 price. Instead of a phone that unfolds open to a larger tablet-sized screen, the Galaxy Z Flip is a regular smartphone that folds closed into a smaller device. It's similar to the Motorola Razr.

The basics — The Z Flip has a 6.7-inch OLED display that bends in half. Samsung says the "Infinity Flex Display" is the first one that is made of glass. Every foldable phone display has used plastic, which is more malleable, but less durable and scratch-resistant than glass.

Underneath the folding screen, there's a Snapdragon 855+ chip, 8GB of RAM, and 256GB of storage. It's not the newest Snapdragon 865, but I'm sure it's fine. I'm just glad it's not spec'd out like a mid-range device. The phone also comes with a 3,300 mAh battery (two cells split between the top and bottom halves of the phone).

There's also a fingerprint reader on the right side (an increasingly rare feature now that most phones are switching to face unlock or in-display fingerprint sensors).

Secondary screen — On the outside of the phone, there's a small little display next to the dual cameras. This screen is tiny so you won't be using it for apps; it shows the time, battery life, and other notifications. Users can tap on the notifications to launch into the app on the larger display. Additionally, you can use the screen to take selfies, though that doesn't sound too practical given its tiny size.

Hinge secrets — Samsung says the hinge of the Z Flip has special fibers inside to help block out dust and debris. We'll see about that. The hinge also snaps at different angles. At 90 degrees, you could, for example, use it to watch YouTube videos on the top half and read comments on the bottom.

Three cameras — Like the Galaxy Note 10, the Z Flip has a center-aligned 10-megapixel selfie hole-punch camera. There's also two 12-megapixel cameras on the back: a main camera and an ultra-wide.