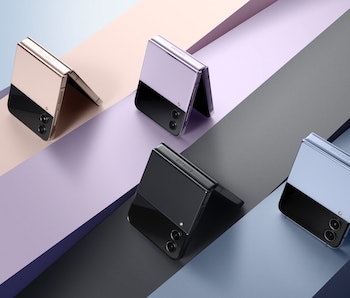 I don’t want to call it a victory lap, but I can’t help but see one when I look at the Galaxy Z Flip 4, the new version of Samsung’s most popular foldable smartphone.

The Z Flip 4, announced alongside the Galaxy Z Fold 4, might not seem all that different from the Z Flip 3, but that’s kind of the point. Samsung’s made the clamshell smartphone sturdier and more powerful, without changing a look most everyone liked. Samsung is also wisely not increasing the $999.99 price.

The same, but better — Visually, I don’t see any immediate differences with the Z Flip 4. Samsung is still pushing its smaller foldable as a fashion-forward device, with the usual fun cases and straps. Based only on the images that Samsung shared, the Z Flip 4’s two halves seem to lay together flatter thanks to a slimmer hinge, and a possibly reduced screen crease to boot. Samsung claims the Z Flip 4 has slimmer bezels than the Z Flip 3.

The company remains focused on the build and durability of its foldables (I wonder why?), promising this go around that the Z Flip 4 will have a Gorilla Glass Victus+ screen that’s “45 percent sturdier” and a stronger Armor Aluminum frame.

Rounding out the hardware improvements, the Z Flip 4 also has a larger 3,700 mAh battery (up from 3,300 mAh on the Z Flip 3) for up to three more hours of screen time, the latest Snapdragon 8+ Gen 1 chip, and updated cameras. The Z Flip 4 comes with a 12-megapixel f/1.8 wide and 12-megapixel f/2.2 ultrawide lenses; Samsung is paying special attention to the wide, which now has larger pixels and the ability to capture brighter photos.

Cover screen redux — In my opinion, the best changes are on the Z Flip 4’s 1.9-inch cover screen, which finally has the ability to reply to messages without opening your phone, start calls, adjust settings and use Samsung Pay.

The One UI foldable software experience continues to be tweaked on the inside as well; this year Samsung’s big idea is turning the bottom half of the 6.7-inch foldable display into a touchpad for controlling apps running on the top half of the screen.

Availability — The Z Flip 4 comes in Graphite, Bora Purple, Pink Gold, or Blue. You can also customize the foldable with some way more interesting colors — my first choice is Khaki Green — available through Samsung’s Bespoke program. The latter gives you five front and back panel colors (Butter Yellow, Brick Red, Khaki Green, navy, and white) and three hinge and frame colors (black, silver, and gold) for a total of 75 combinations.

Read our hands-on with the Galaxy Z Flip 4 for even more.