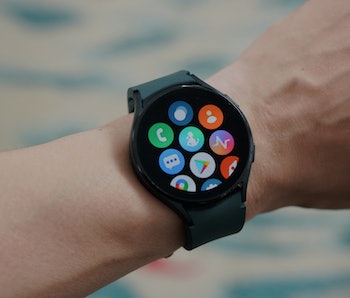 Google Assistant is available to download today on Samsung’s Galaxy Watch 4 series of smartwatches, well over half a year after the company launched its flagship wearable.

During Google I/O 2022 Samsung revealed that it was finally incorporating Google’s voice assistant “this summer,” but I guess summer is here a little bit early.

Google Assistant — According to Samsung, once you download Google Assistant from the Play Store (there’s a dedicated Play Store app on the Galaxy Watch 4), the voice assistant runs in the app tray. You can summon Google Assistant through the normal “Hey Google” wake word, or with a long press by “assigning the home button to run it with a press and hold.” That sounds like you can replace Samsung’s Bixby voice assistant entirely if you want to, so Input is checking with Samsung to confirm that’s actually the case.

What’s great is either way, you don’t need to download Google Assistant on your phone to make this work. Just having it on your watch is enough (a testament perhaps to Wear OS’s ability to be a little platform all its own).

Wear OS & Pixel — Wear OS 3 was developed in collaboration with Samsung and Google, pulling in a little bit of Tizen, Samsung’s custom operating system, along with Google’s pre-existing work with Wear OS. Until now, Samsung’s take on Wear OS for the Galaxy Watch series has prioritized the company’s ecosystem, but with Google’s own Pixel Watch launching later this fall, it seems like Google services are going to start trickling back into the larger Wear OS ecosystem overall.