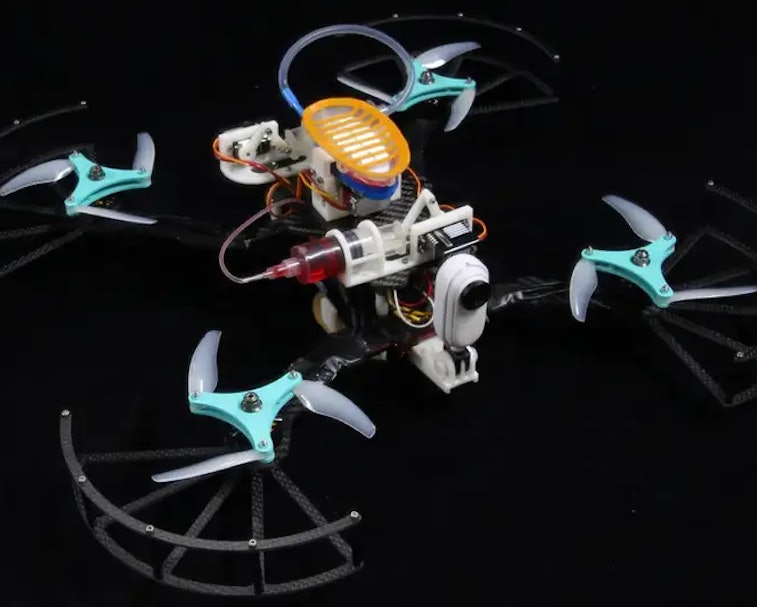 This amphibious, hitchhiking drone looks like it came straight out of a spy movie. Naturally, it can fly, but it can also dive into water and transform its propellers to navigate underwater. What’s more, the drone can latch itself to surfaces in the water or in the air, whether they’re wet or dry.

Researchers from Beihang University, Imperial College, and Empa published their findings in a journal with Science Robotics showing off their incredible feat of drone engineering. The researchers drew a lot of inspiration from examples in nature to create this multi-purpose drone.

The suction cup feature lets the drone stick to different surfaces and was derived from remora fish, who attach themselves to larger fish with their unique dorsal fin design. The drone was also partly inspired by kingfishers who fold their wings in when they dive through the surface of the water when hunting for fish. Translated to the drone design, the propellers are fully extended when in flight, but retract as soon as it hits water to quickly transition into underwater mode.

Sticks to any surface — The researchers tested the drone’s suction cup on a variety of surfaces, like wet slippery rock, a curvy conch shell, and a moving underwater surface. When attached to a surface under water, the drone only needs to use five percent of its power than it would normally need to navigate. The drone can also hitch rides mid-air, where it only requires two percent of the energy needed to keep itself flying.

At roughly a foot long and wide, researchers are hoping that it’ll be used in research expeditions or wildlife surveys. Unfortunately, the drone only works up to depths of 2.2 meters (roughly seven feet) right now since it’s limited by the controller’s range. But, the researchers say the drone may be able to work in greater depths in the future.

Super versatile — These projects rarely make it to the consumer market since they’re usually very experimental or have a very specific enterprise use in mind. It’s the same story with this amphibious drone, which would most likely just be used for marine research and the like.

I can’t help but dream of the possibility of consumer drones following you from the top of your cliff dive all the way to the bottom of the water where you land. At the least, it’d prevent drones crash landing into the water.