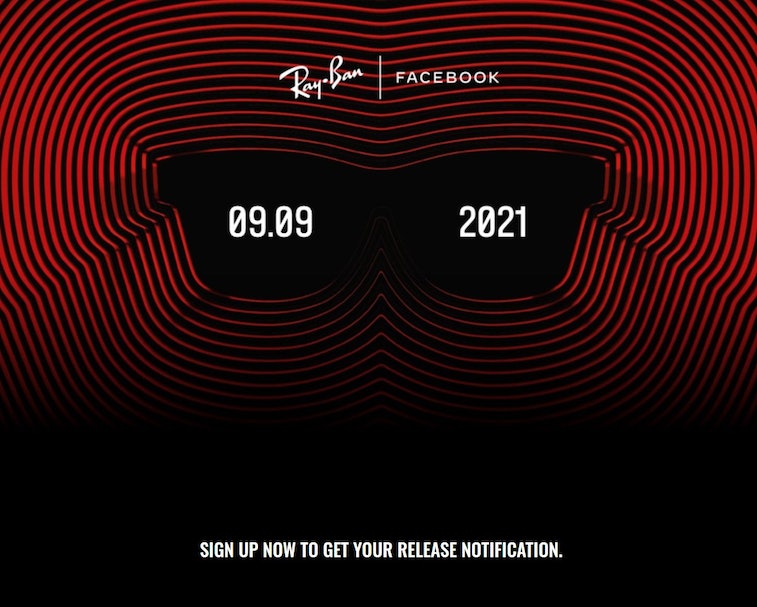 Between the Apple event on September 14, Microsoft’s Surface event on September 23, and Google’s Pixel 6 event rumored for October, there’s a lot going on in the next few weeks. Not to be left behind, it seems Facebook is piling on with its own announcement in partnership with Ray-Ban.

Coming soon — We’ve known that the two companies have been working together on a pair of smart glasses since last year, and it looks like we’re finally about to find out more. First noticed by UploadVR, Ray-Ban has posted a teaser for what appears to be the teaser for the smart glasses co-developed with Facebook. The teaser image on Ray-Ban’s website shows a silhouette of what looks like Wayfarer-style frames with a cryptic September 9 date to keep us enthralled. Though the site lacks any juicy information, you can sign up to get a “release notification,” which should alert you when the glasses become available for purchase.

Speculation that the smartglasses are finally coming to market began yesterday, when Andrew Bosworth, VP of Facebook Reality Labs, the department within the social network that works on AR and VR, tweeted a video of himself presumably using the smartglasses while doing various vacation-related activities such as throwing pillow cushions at his boss. While we can’t see the actual product in the video, it’s believed that the video was shot from the glasses. The single eyeglass-wearing emoji basically might as well be confirmation.

This aligns with the 2021 release date teased last September. Back in July, Facebook CEO Mark Zuckerberg confirmed the product would be the social media company’s next piece of hardware in an earnings call. We also learned that the smartglasses, according to Zuckerberg, would “let you do some pretty neat things.”

Not so smart — We don’t know what those “neat” things are, exactly, but they probably won’t revolutionize the AR/VR industry or give you superhuman hearing. Presumably, these smartglasses won’t have anything to do with Project Aria, the prototype smartglasses used by Facebook employees to test new AR features. More than likely, the glasses will have more in common with Snap’s AR-powered Spectacles. Snap’s smartglasses have two cameras, microphones speakers, and touch controls, as well as full positional tracking that determines where to put virtual objects relative to where you are and what you’re looking at.

The Facebook metaverse — The September 9 date should uncover more information, with hopefully a release date, price, or a list of features made available after a year of teasing us. The Facebook Connect Conference, which is taking place on October 28, will unveil more about the company’s future in the AR and VR space. News regarding a new Quest headset may be a possibility, as well as an update on Project Aria. Undoubtedly, Zuckerberg’s idea of the metaverse will pop up again, with more ideas like Workrooms bound to make an appearance.