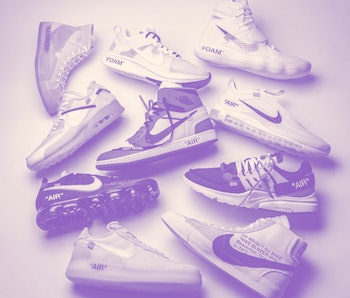 Rares is a new-age marketplace that allows users to purchase and own “shares” of a given pair of highly-coveted sneakers. Last April, the company made waves after acquiring the same Air Yeezys that Kanye West wore to the 2008 Grammys for a record-setting figure of $1.8 million. Now the platform has introduced an NFT project dubbed the “Hype Drop L Club,” which allows members to reap some value over lottery losses on Nike’s SNKRS app.

The club relies on active participation, as new L-related NFTs will drop each week depending upon which SNKRS lotteries are taking place. In order to join, users must submit a screenshot of their lottery rejections (either through email or text) to Rares — from there the company will send out a link to its Hype Drop L Club, where the aforementioned L NFTs will be available. In order to qualify, Rares needs to receive submissions within 24 hours of a particular lottery.

For each drop, the first 100 people to send in proof of their L will gain access to diamond-level NFTs, while the next 900 submissions receive access to club-level NFTs. The former will be worth $60, while the latter will start out at $5.

“Millions of people each week apply for the SNKRS lottery and lose. Literally, 90 percent of people who want to win, lose each week,” Gerome Sapp, Raresfounder and CEO, told Boardroom. “Rares wanted to mobilize and incentivize this community for the first time. We want to now provide an opportunity through an NFT to derive value and turn your loss into an NFT win.”

So where’s the value? — As we’ve seen with NFT projects that are able to withstand the test of time, the value of a given release has less to do with the NFT itself and everything to do with the strength and inter-connectedness of the community around said project.

Aside from an emphasis on collective frustration and frequent engagement, Rares will offer other perks for NFT holders, including discounts on sneakers, investment credit on its platform, and access to the company’s Discord server. A secondary marketplace is coming that will facilitate the reselling process for L NFTs as well.

Rares is indicative of the changing nature of sneaker culture — shoes are becoming financial assets as much as they are an aesthetic choice or physical tie to history. This Rares project comes across as a half-baked idea you might devise with friends during a late-night hangout. Throw in the fact that people have been documenting their SNKRS app Ls on Twitter for years now and you’ll see it really isn’t something that needs to be monetized.

Still, as mentioned earlier, it doesn’t matter what the actual NFT is: Rares clearly wants to strengthen its community by targeting a universal pain in the sneaker enthusiast’s existence. But does that mean we need to buy into an NFT program to empathize with each other?