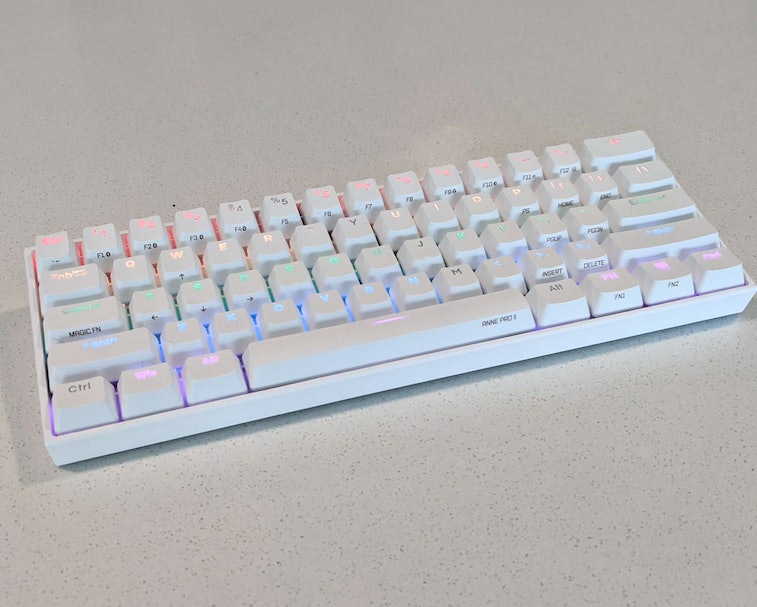 With all the Prime Day deals floating around the internet, it’s easy to get carried away and buy something you may not need just because it’s cheaper. We’ve all done it, but it’s wise to step back and see what else is out there.

One great example is the Razer Huntsman Mini, which is on sale today for $100 (regularly $130). Not bad, you may think, but you should probably think again. There are better 60% mechanical keyboards with more features that cost less, like the Anne Pro 2, which is $71 (if you have Prime). I know, because I own this superior mechanical keyboard.

As a 60% mechanical board, the Huntsman Mini doesn’t have a function row, number pad, or dedicated arrow keys. It’s marketed toward gamers, who really only need the WASD keys and several others near it, so those missing keys are not crucial. The keyboard uses mechanical switches, which are all the rage these days, with Razer opting to use its line of Opto-Mechanical switches. These switches are hybrids that use mechanical components and register keypresses via an optical sensor. According to Razer, these switches are as fast as the speed of light, which is savvy marketing for gamers who think a switch’s speed can make them better. There is an option for either the purple or red switch; the purple is slightly clicky and the red is a smooth linear switch. I’ve tried the purple switches and I was not impressed.

The Huntsman Mini has decent looks (if that matters to you) and its aluminum frame lends it some heft. It also uses Razer’s Chroma software to tweak the RGBs. It’s a nice keyboard for the build quality, but it’s not worth $130 otherwise. I wouldn’t even say it’s worth $100.

Clone wars — The Anne Pro 2 is another keyboard that’s on sale this week and is almost identical in design to the Huntsman Mini. They’re basically the same keyboard. It comes in white or black and has a 60% layout that uses double shot PBT keycaps with RGB that can be configured via software. The Anne Pro 2 isn’t made of aluminum, doesn’t use proprietary Opto-Mechanical switches, and doesn’t sport a Razer logo, but I think it’s better in other ways.

For one, the Anne Pro 2 works in wired or wireless mode, using Bluetooth to communicate with most computers or phones. The keyboard houses a 1,900 mAh battery that can last for weeks depending on RGB usage. That, along with a sturdy, yet light, plastic build, makes the Anne Pro 2 a better portable companion for when you need to travel with a keyboard. It also uses a high-profile frame that shrouds the bottom of the keycaps and keeps dust and other debris out; the minimal covering doesn’t affect performance much, but I prefer it over exposed keys. But what sold me was the switch selection — the Anne Pro 2 can be configured with a variety of Gateron or Kailh Box switches.

Red switch, blue switch — Gateron switches are Cherry MX clones, using the same color labeling to distinguish between switches (i.e., reds are linear, blues are clicky, browns are tactile). Many consider the Gateron Reds to be as good or better than Cherry MX Reds, myself included, but the browns are not to be overlooked. The reds are a great choice for gaming while the browns are better for general use. Picking either of these switches with your Anne Pro 2 results in the lowest price: $71 as of the time of this writing. The Kailh Box switches are pricier, with the brown and white switch options raising the total to $100. I have the Anne Pro 2 with Kailh Box Brown switches, and it’s been one of the best typing experiences I’ve had on any switch. That’s no hyperbole. In my opinion, the Cherry MX Browns don’t even compare.

The Huntsman Mini’s Opto-Mechanical switches may be better for gaming, but unless you’re a pro gamer, the difference in speed is infinitesimal at best. For my needs, which is mostly typing and some light gaming where response time is not extremely critical, I find the Anne Pro 2 to be a better choice because of its wireless connectivity and switch selection. Though I went for the higher-priced model with the Kailh Box Brown switches, the more affordable options with Gateron switches are just as good and probably better for you than Razer’s switches. If you want clicky switches, the Gateron blues have a better click and tactile key travel than the purple Opto-Mechanical switches, and the Gateron Reds are plenty fast without the need for an optical sensor.

Look, I’m no keyboard snob that looks down on keyboards from PC gaming brands, such as Corsair or HyperX, but I also know when I’m getting a bad deal. Again, unless you’re a pro gamer, the “huge savings” on the Huntsman Mini are unlikely to be worth spending for Razer’s magical light is inside of the switches.