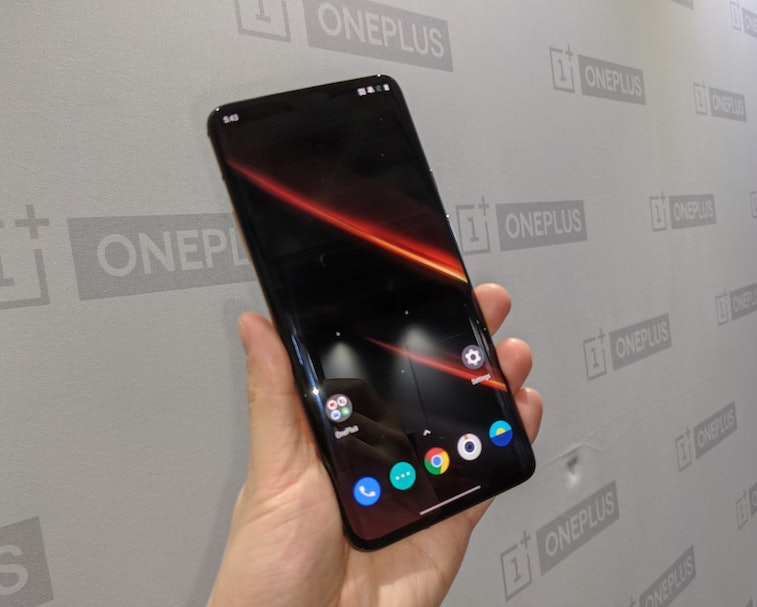 OnePlus's Concept One might look and smell the part of a premium phone, but a lukewarm reception for its "invisible camera" makes it all the more likely it'll remain a concept. Far more likely to see the light of day is the a 120Hz Fluid Display the Chinese company just announced. OnePlus CEO Pete Lau didn't announce when the smoother screen (sometime in 2020) would show up, but maybe the OnePlus 8?

Another OnePlus achievement — On paper, it's a small step up from the 2K+ 90Hz Fluid Display OnePlus packed into the 7T Pro. But as SlashGear reports, 120Hz has generally been limited to LCD panels, so it'll be impressive if OnePlus can manage that sort of refresh rate with an AMOLED panel.

OnePlus says it worked with Samsung Display on the new 120Hz screen, which also has 1,000 nits of peak brightness, and a 240Hz touch rate. The 120Hz display supports up to 1 billion shades of color (cool, but can your eyes even see that many shades?) and a new "MEMC" motion-smoothening technology to convert videos at 24 or 30 fps to 60 or 120 fps; this is "soap opera effect" that Tom Cruise has railed against and technology every sane person should turn off immediately.

Forcing Apple to speed up (its displays) — OnePlus is now in a position to put the heat on its competitors. First, it was the in-screen fingerprint display, then the 90Hz display, and now it sure sounds like it's upping the ante once again with a 120Hz display.

Features on OnePlus phones have become such a force that Samsung reportedly had no choice but to match (maybe even exceed) the heavily-spec'd OnePlus 7T Pro with the Galaxy S20 (successor to the Galaxy S10).

However, where's Apple in all of this? As excellent as the iPhone 11 and 11 Pro displays, they're still stuck with 60Hz refresh rates. Might 2020 be the year Apple bumps up the refresh rate? We'd love to see it, so long as Apple can do so without having the same problems that plagued the 90Hz Google Pixel 4 display.