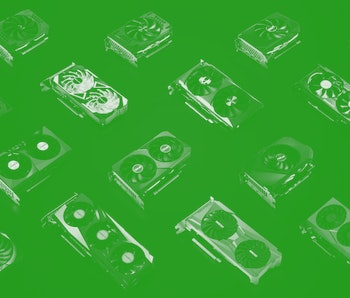 The closer we get to the release of Nvidia’s latest flagship GPUs, the more we’re seeing leaks that hint at performance far beyond its current lineup graphics cards. The latest video from YouTuber Moore’s Law is Dead (MLID) compiled leaked information alongside new tidbits on specs of Nvidia’s GeForce RTX 40 series.

MLID details in the video that the top-shelf offering, which is likely to be the GeForce RTX 4090, will have roughly double the rasterization and the ray tracing performance of the GeForce RTX 3090. Nvidia’s upcoming graphics cards are expected to be a huge jump in performance from its 30-series, but it’s going to have to go up against AMD’s RDNA 3 graphics cards and Intel’s Arc-series of GPUs.

It’s nice knowing that Nvidia’s 40-series GPUs will be impressive, but most of us have already accepted that we won’t be able to get our hands on it. Consumers are still having trouble finding GeForce RTX 30 graphics cards new or used and it’s probably going to stay that way for a while, according to Nvidia.

Double the performance — There’s no harm in drooling over these next-gen specs, though. MLID says with confidence that the most powerful GPU, which will be built on the AD102 die, will have at least an 80 percent rasterization increase over the GeForce RTX 3090. On top of that, the YouTuber estimates that the ray tracing performance of the highest-end graphics card will likely be at least double that of the GeForce RTX 3090. MLID also reveals in his video that the memory controllers in the AD102 die will outpace previous generations and could be built to support next-gen GDDR7 memory speeds.

Performance upgrades will come at a price, however. MLID predicts the new 40-series graphics cards could require anywhere between 400W to 600W, which would be a noticeable bump up from the minimum 350W requirement of the GeForce RTX 3090.

Still no release date — Nvidia has still not confirmed any dates for the 40-series GPUs, but they’re likely to sell out fast no matter when the date is. The launch is still rumored to be for the second half of 2022, with some leaks predicting more specifically in the end of the third quarter of this year.

MLID adds in his video that Nvidia could stop production of its Ampere lineup by May, but PCMag reported that the company is considering continuing production of its 3000-series even after they launch the 4000-series. If that’s the case, it might be a little bit easier to finally get some graphics cards.