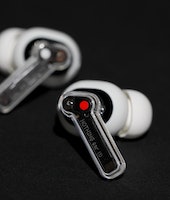 Date for Nothing's 'The Truth' keynote.

Nothing is indeed planning to announce something on March 23. The tech startup behind the Teenage Engineer-designed Ear (1) wireless earbuds is holding a “The Truth” livestream event starting at 9 a.m. ET/6 a.m. PT to “share some announcements about our 2022 roadmap” the company said in a press release.

“The Truth,” we presume is a nod to the many YouTube videos that love to use the same title to bait viewers into watching. Hopefully, Carl Pei’s startup isn’t all smoke and mirrors on March 23 and actually has interesting products to announce. “There has been a lot of speculation, and it’s finally time to tell you the truth about what we’re building at Nothing, at our upcoming event on March 23,” Pei said in a tweet.

Nothing smartphone incoming? — Rumors of a Nothing smartphone recently surfaced. Pei and Qualcomm CEO Cristiano Amon were photographed at MWC 2022 looking at what appears to be a phone covered up in a case. Pei has been cryptic on Twitter; his tweets potentially downplaying things. On March 5, Pei tweeted “Don’t believe the rumors!”

“Why Nothing? There used to be lots of momentum and optimism around consumer tech. People believed that it would make the world better. Today, that’s gone. I stopped feeling inspired. Nothing’s ecosystem is here to shake up the status quo and capture people’s imagination again.”

He also says “last year was a warm up” and “2022 is our real founding year.” The company has previously said it had five products in the works. Pei has said he wants an entire ecosystem of products that make technology invisible. At least that’s the end goal, though it may take some time to get there.

More money raised — Alongside the announcement for the March 23 livestream, Nothing said it has secured $70 in Series B financing for “scaling its product ecosystem and establishing its London Design Hub” which will be led by recent hire, ex-Dyson Head of Design Adam Bates.

More money means more things to do. As always, Nothing is one tech company to watch.