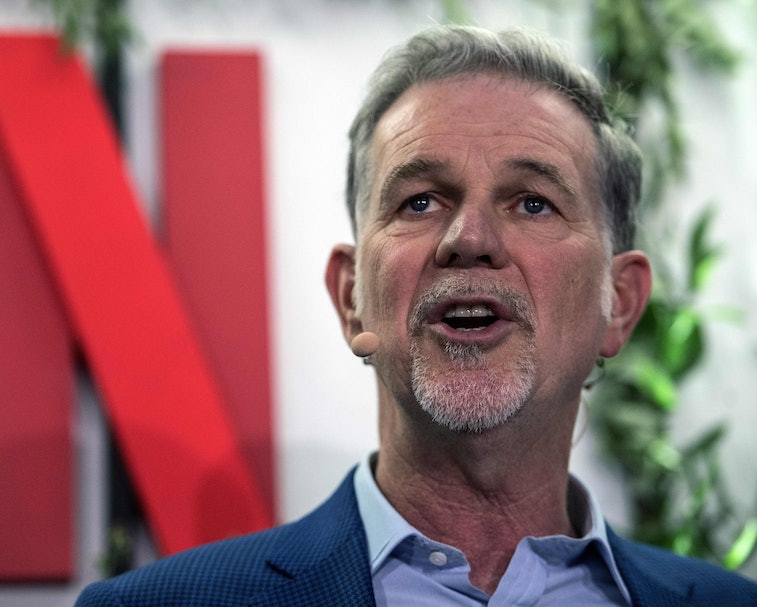 Netflix yesterday increased its prices in the U.S. A standard plan now costs $14 a month, while a premium one (that includes up to four screens and 4K content) is now priced at $18. The company last increased prices for its home market in January 2019, and some users have taken to Twitter in protest, claiming the service is now too expensive and shouldn't be looking to squeeze consumers, many of whom are already spread thin thanks to the pandemic.

The price changes are being made so that Netflix "can continue to offer more variety of TV shows and films,” a spokesperson told The Verge. While some users claimed they'd be canceling their subscriptions, the market was far more bullish about the news, with the company's share price climbing more than 4 percent following the news.

One show in town — With Netflix investing billions in original content each year that can't be sourced (legally) anywhere else and the coronavirus here to stay in the U.S. until at least next year, we're inclined to agree with the investors. We suspect most users will gladly cough up the additional cash, even if it does mean the standard plan is now a buck more than Hulu, ESPN+, and Disney+ combined. That said, it's still a dollar cheaper than HBO Max.

While the company has been criticized from some quarters for its ruthless culling of some shows after only a season or two, it's also continued to attract audiences with its original shows like The Queen's Gambit, Sneakerheads, Ozark, The Crown, and a growing selection of documentaries, movies, and reality shows.

Content is expensive — As the soon-to-be-shuttered Quibi learned the hard way, making compelling content is expensive. But without it, streaming companies stand no chance at all in what's becoming an increasingly crowded marketplace. Disney+ has boomed because of the massive catalog of material it owns and the franchises it continues to expand upon, like the Star Wars spinoff, The Mandalorian. Newcomer Peacock, meanwhile, has NBCUniversal's back catalog to offer alongside originals, and Apple, well Apple hired big hitters like Oprah Winfrey and Steven Spielberg for its Apple TV+ service.

Netflix can't slow down its content manufacturing machine if it's going to hang onto its more than 73 million U.S. customers, who're now being asked to pay for ever more subscriptions, which collectively are beginning to approach the fees cable networks charge... despite the cable model being precisely the one streaming originally sought to undercut.

No more free trials — Netflix is clearly confident in its offering because earlier this month it stopped offering the month-long free trials that were previously a cornerstone of the company's customer-acquisition strategy. Instead, it's now offering free samples of shows and other content. The company added 15 million new subscribers in the first quarter of 2020, bringing its global tally to more than 180 million. Something tells us the recent price increases won't change much for what remains the world's most popular video streaming service. If anything, they'll fill its coffers and lead to a slew of additional content in the coming year that'll make the service even harder for most people to quit.