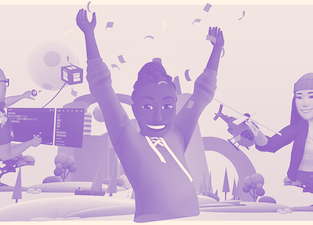 Meta is bringing in-app purchases to Horizon Worlds, the company announced on Monday, finally testing out a more straightforward way for creators to make money in the company’s early take on “the metaverse.”

Meta’s introducing two ways to earn money in virtual reality to start: either through directly selling items and effects to other Horizon Worlds users or through the company’s “Creator Bonus” program.

Monetization — Selling items will be limited to “a handful of creators” for now, with the ability to purchase being made available to users 18 years and older in the U.S. and Canada. In Horizon, Meta plans on taking 25 percent of whatever’s left over from a creators’ earnings after hardware platform fees are applied. For example, in the case of Meta’s own Quest Store, that means 25 percent taken out of the 70 percent cut creators already get to keep from transactions.

Meta tells Input that the 25 percent cut will remain consistent as the company expands Horizon Worlds to other platforms. That’s the company’s other major news — as reported by The Verge and confirmed to Input, Meta plans to bring Horizon Worlds to smartphones later this year and game consoles sometime in the future.

The Creator Bonus program won’t be as financially complicated. Meta plans on paying out bonuses to creators who participate in “goal-oriented monthly programs” that encourage them to use specific features and tools in Horizon Worlds. These bonuses won’t be subject to any kind of commission from Meta, but they will have to meet the company’s conduct policies and presumably other qualifications.

Early days, again — Like much of Meta’s current metaverse plans, Horizon Worlds monetization is very early. It’s a meaningful expansion on the company’s $10 million Horizon Creators Fund, but don’t expect to be spending big bucks in VR just yet.

I’m still skeptical of “the metaverse” in general, but for Meta, defining a way for people to make money in VR (and eventually AR) is a big part of its pitch. And with a reported 300,000 monthly users legless-ly moving through Horizon Worlds, there’s a chance there’ll at least be some interest in starting a VR side-hustle once the monetization features open up to more people.