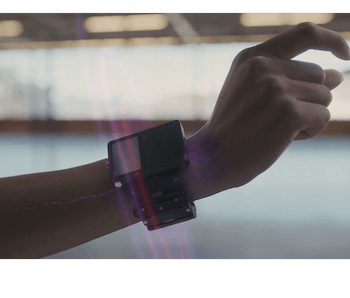 Like the proud father of a very goofy child, Mark Zuckerberg demoed Meta’s future mixed reality controller to the executives of EssilorLuxottica on Wednesday.

The event, besides producing an Instagram post, adds further confirmation to reports of Meta’s plans to use EMG technology to interact with its future augmented reality glasses.

Neural interface — Meta’s team was in Italy to discuss future smart glasses plans with its current eyewear partner EssilorLuxottica (creators of the Ray-Ban Stories). “Here Leonard is using a prototype of our neural interface EMG wristband that will eventually let you control your glasses and other devices,” Zuckerberg wrote in his Instagram post. The man wearing the chunky band in question is Leonardo Del Vecchio, the cofounder and chairman of EssilorLuxottica.

Meta’s demoed the neural interface wristband before as a Facebook Reality Labs project. The company bought CTRL-Labs, the team behind the differential electromyography tech that powers wristband, in 2019. Showing the wristband off to business partners, though, and directly connecting it to a future pair of AR glasses made with EssilorLuxottica, seems to suggest that Meta’s pretty confident in the technology.

What about hands? — Meta’s current VR hardware is heavily dependent on either controllers or hand-tracking to use, but clearly the final goal is even more ambitious. Hand-tracking is more natural than using a controller, but barely having to move at all — as the current wristband prototype seems to allow — would be even better, especially for anyone using AR or VR hardware with limited mobility.

Reports suggest the ideal version of Meta’s wristband (i.e. one that isn’t the size of a first-generation Garmin Forerunner) is still many years off, but Zuckerberg seems content to keep betting the farm on “the metaverse,” even if the methods seem even more invasive than cameras. Maybe his Italian friends are convinced too.