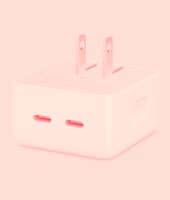 How much extra you need to pay to get Apple's dual USB-C charger.

The new M2 MacBook Air is bound to sell like hotcakes. It’s essentially a thinner, more compact, and lighter version of the 14-inch MacBook Pro. The four colors will surely be a hit.

But I want to turn your attention to the dual USB-C charger that Apple proudly announced at WWDC 2022. This “35W Dual USB-C Port Compact Power Adapter” (as it’s officially called) was the subject of intense scrutiny via leaks earlier in the year. Turns out the charger is for the M2 MacBook Air. Awesome! It looks great.

After highlighting the M2 MacBook Air’s 18 hours of battery life (for “video playback” a metric that I humbly wish would not be used as the metric since nobody is watching video nonstop that long), Apple Engineering Program Manager for Mac, Kristin White, announced the new dual USB-C charger. “There’s also some new charging options, including a compact power adapter with two USB-C ports so you can charge two devices at once,” White says.

A 30W USB-C power adapter comes as a default with the M2 MacBook Air. However, if you want the dual USB-C charger, you’re gonna need to pony up an extra $20 at checkout. That’s not so bad, but it’s still an extra cost.

And then, there’s the fast charging that White also talked up. The keynote pacing was so quick you might have missed the tidbit about needing the “67W USB-C Power Adapter” to fast charge the M2 MacBook Air “up to 50 percent in 30 minutes.” Interestingly enough, the 67W charger is also only an extra $20 at checkout, same as the dual USB-C charger. The fine print also says that the adapter is a “free upgrade” for M2 MacBook Airs with the 10-core GPU and 512GB SSD or higher.

I had a feeling it was too good to be true that Apple would throw in a dual USB-C charger as a pack-in. And I was right.