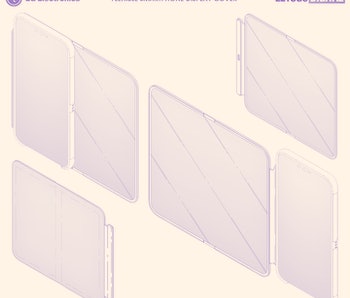 While Samsung, Motorola, and Huawei all fall over one another to make the world’s first genuinely desirable (and reliable) foldable smartphone, LG’s marching to the beat of its own drum, as usual. Instead of making a foldable phone, it’s considering a foldable OLED display that can be wrapped around a phone.

At least, that’s what it looks like according to a new patent spotted by LetsGoDigital. LG’s patent includes a bendable OLED display with a strip and connection pins that attach it to the edge of a smartphone. Users would be able to effectively double the size of the phone screen by opening half of the OLED cover, or triple it by unfurling the cover entirely and putting it alongside the handset.

This sounds about as practical as typing on an invisible keyboard using a phone’s selfie camera: that is, not at all. But it’s definitely… innovative.

A history of novelty –– LG’s pioneered popping a wide-angle camera on the back of smartphone cameras and modularity with its G5, it was the first phone maker to launch a 360-degree camera, and when the first foldables emerged it opted for a secondary display-as-cover instead. The company certainly gets points for novelty, but sadly gets a lot of them docked again for execution.

But a low hit rate –– The G5’s modularity made it prone to water damage, and component options never took off the way they have for the Moto Z range. The LG 360 Cam, meanwhile, offered terrible resolution and sketchy image stitching when compared to Samsung’s Gear 360. Finally, unfortunately for LG, convincing people to buy a costly secondary-display cover for their V50 or G8X required the equally difficult feat of convincing them to buy a V50 or G8X in the first place.

Still, at least LG makes class-leading TVs, and if it improves on last year’s roll-up model at CES 2020, we’ll be the first in line to ooh and ahh at it.