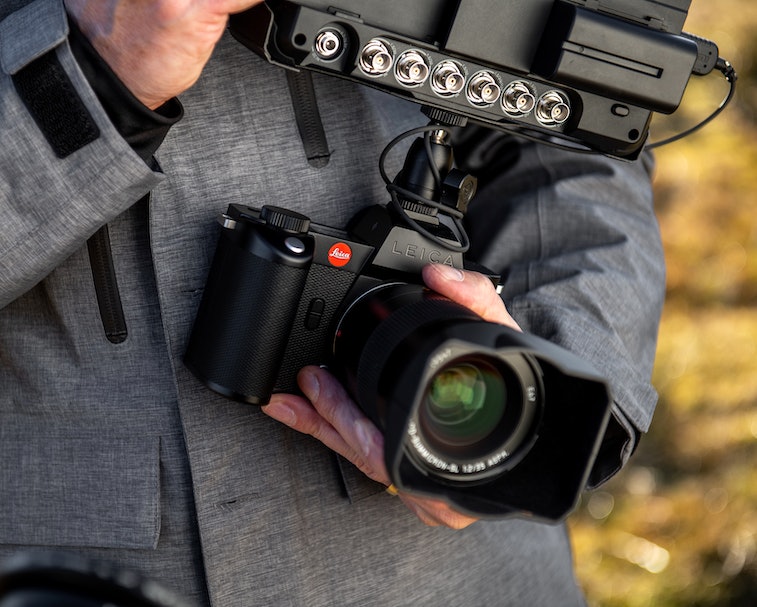 When you hear Leica, a few generalizations come to mind: cameras with the red dots on them; the German company that sells really expensive cameras; cameras that can’t compete with Canon, Nikon, or Sony on features.

You wouldn’t be wrong for thinking any (or all) of these things. Yet, Leica still perseveres. Throughout its 106-year history, the German imaging company has weathered changing trends by not directly competing with the likes of Canon and Sony on technology. It has survived over a century of technology and photography innovations by sticking to the humanity of photography with hardware and image quality that endures generations.

But the times are changing. While high-quality cameras and glass that produce sublime film-like photos remain Leica’s top focus, the company is getting more serious about videography with the new SL2-S mirrorless camera. In true Leica fashion, the new camera, which is a sibling to the SL2 rather than a replacement, is handmade, packs just-enough-features, and very pricey starting at $4,895.

The SL2-S, available for pre-order starting today, isn’t going to replace the Sony A7S III or Canon EOS R5’s of the world. But if you’ve been waiting for Leica to deliver a camera that’s more than just a dip into the videography waters, the SL2-S sounds like a better offering than any previous video-capable Leica.

Good design is iconic — The SL2-S resembles the SL2 because Leica’s changed almost nothing about it. The full-frame mirrorless camera is a few grams lighter than the SL2, but otherwise, the body is largely unchanged. It’s still made of a mostly magnesium-alloy frame with buttons, dials, and displays exactly where they are on the SL2. This is all intentional because Leica doesn’t do frequent industrial design refreshes. It’d be too costly since each camera is handmade in Germany.

Less resolution, better video — If you do a side-by-side comparison between the SL2-S and the SL2, you might be disappointed that Leica dropped the resolution from 47.3 megapixels to 24.6 megapixels. I feel you. Sure, you don’t get as many pixels to play with per shot, but the SL2-S does have improvements in other areas: faster continuous shooting (25 fps vs. 20 fps) and with continuous autofocus (9 fps vs. 6 fps) and a higher ISO ceiling: ISO 1SO 100-100000 vs. ISO 50-50000. There’s also still a multi-shot mode that combines eight photos into one 96-megapixel photo; it’s not as large as the 187-megapixel multi-shot photo the SL2 is capable of compositing, but it’s still a huge photo.

Video is where the SL2-S shines brighter than the SL2. In addition to 4K60 in 10-bit, the SL2-S also records Cine4K in 17:9 aspect ratio at 4,096 x 2,160 resolution at up to 60 fps. For filmmakers, the higher frame rate is more useful than the SL2’s 5K recording that’s capped at 30 fps. The SL2-S also has no recording caps, meaning you can record clips for as long as you want so long as you have the storage. Additionally, the camera has three modes for cinematic color space: Rec. 709, L-Log Rec. 2020, and HLG Rec. 2020. All things more professional videographers deserve in a $4,900 camera.

This is everything you get on day one. Leica tells Input it already has a firmware update planned that’ll include a long list of features including (but not limited to) HEVC (high-efficiency encoding) and the ability to split recordings into 1-minute clips (for preventing data loss).

Too little too late? — I know what you’re probably thinking: the SL2-S really can’t compete with the latest full-frame Sony or Canon. Not on still photos or video capabilities. That is true. When I brought up to Leica the fact that the SL2-S doesn’t even have video-centric features like an articulating screen that flips out or a more ergonomic body for attachments like microphones, the company’s marketing heads seemed unfazed.

Like all of Leica’s interchangeable lens cameras, the SL2-S, is not chasing its rivals. The company reminded me that it has four values that are core to its product design: iconic, authentic, passionate, and German. Could Leica have included a flippy screen? Leica tells me yes, but it would take away from the authenticity and iconism of its design. Could there have been better water sealing? Sure, but that would have meant compromising on the metal design. Leica is unwilling to budge on decisions that would make its cameras less Leica-like.

For Leica, the SL2-S is an important step toward delivering more video recording capabilities to its loyal community who’ve likely amassed a collection of Leica lenses. Leica operates in its own bubble — a bubble that has proven to be resilient to the fast-changing imaging landscape around it. The SL2-S is not for you if you want the latest and greatest in camera technology. It’s for you if you want a timeless camera that’ll last a lifetime (or several). So is it too late? No, Leica thinks it's just right and just enough.