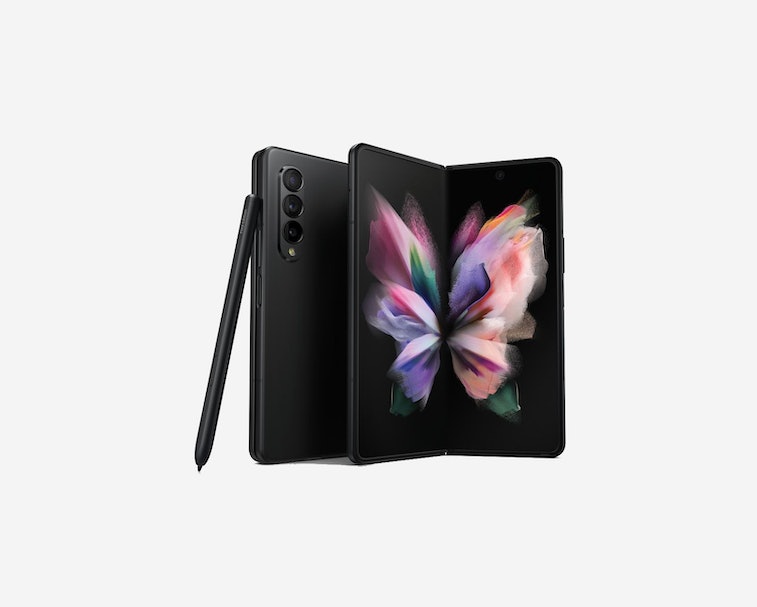 In the latest leaked images of Samsung’s upcoming foldable phones, we get a better look at the Galaxy Z Fold 3 and Z Flip 3 that initially leaked in May. Apart from two angles of the Z Fold 3, there isn’t much information on Samsung’s flagship foldable; previous reports suggest that it could see a significant price cut. The lower price may entice some on-the-fence buyers to finally make the switch, but the leaked images show the crease remains, a sore spot that may put off potential buyers.

Below the fold — The rendered image leaks, via known leaker Evan Blass, show two distinct angles of the Z Fold 3 and Z Flip 3, with more to glean from the latter. The Z Flip 3 appears to have a larger external “cover” display and rearranged dual-camera placement, with the two lenses sitting top and bottom instead of side-by-side. Unlike the original Z Flip, the flash is now under the bottom lens instead of beside it. Based on the leaks, it seems the phone now comes in a two-tone color option, with the image showing at least one scheme in champagne and black.

The updated device seems to have escaped traditional nomenclature, eschewing the “2” moniker for “3” for some reason. While Samsung is no stranger to skipping model numbers (e.g., Note 6), it’s still a mind-boggling decision that may prompt customers to wonder just what the hell happened to the Z Flip 2.

As for the Z Fold 3, not much can be said based on these images, except for a different camera layout that sees the three-camera stacked on top of each other in a row. In Input editor Raymond Wong’s review of the Z Fold 2, he insisted on Samsung adding S Pen support to the device, a feature that might come true for the third-gen foldable. In a second image, a black stylus emblazoned with the words “Fold Edition” leans against the Z Fold 3, hinting the new foldable will launch with an S Pen, or at least support for one.

The added functionality the S Pen provides to the Z Fold 3 could be more alluring than, say, a better camera, but the real problem with the device remains. The crease found on the first two devices is still there; it’s a design compromise that may never disappear on foldables. The question is: does it bother you? If yes, nothing Samsung does will make their foldable phones tempting.

Still expensive — There is good news for the Z Fold 3, at least for those who can overlook the crease. Earlier leaks suggest that the price of the Z Fold 3 and the Flip 3 could come down by 20 percent. With the previous Z Fold 2 originally priced $2,000 (then dropped to $1,800 in April), the forthcoming foldable could see a $400 price cut, which would bring it down to around $1,600, which is not nothing. While the price cut makes it more affordable to more buyers, it’d still be quite pricey. There is no word yet on when these devices will launch. But if history is any indication, the foldables could arrive by fall.