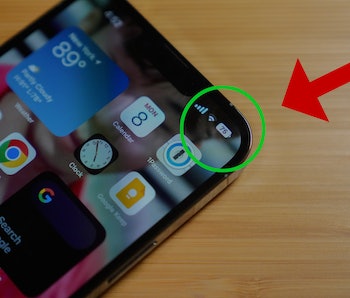 After several years of avoiding an easily solved problem, Apple will once again let you view your iPhone’s battery percentage in iOS 16, at least based on the fifth beta the company released to developers today.

This should be easy — Now technically some insight into your phone’s battery percentage never totally disappeared, you can still call it up in Today view or by sliding down Control Center in the top right corner of your iPhone in iOS 15.

Apple used to let you proudly display how you lived your life dangerously at 15 percent on every screen with a simple toggle in the Battery section of the Settings app. But then the feature disappeared with the introduction of the iPhone X because of how the notch ate up screen real estate.

Apple has apparently found an elegant solution to this somehow confounding problem by just putting your battery percentage on the battery icon. Personally, I’ve accepted “letting the mystery be” and interpreting Apple’s battery glyph as I see fit, but the paranoid power users among us need data. To them, Apple is offering relief in the form of a new number on the screen.

A permanent return? — Battery percentage is available now in iOS 16 developer beta 5 and will presumably trickle into the public betas at some point in the coming weeks. With iOS 16 expected to officially launch alongside the iPhone 14 very soon in September, I’d assume the battery percentage will be an official iOS 16 feature, but it’s still in beta, so who can really say.

The fact that every iPhone user seems to be celebrating this small, but extremely useful feature should tell Apple all it needs to know about what features to ship.