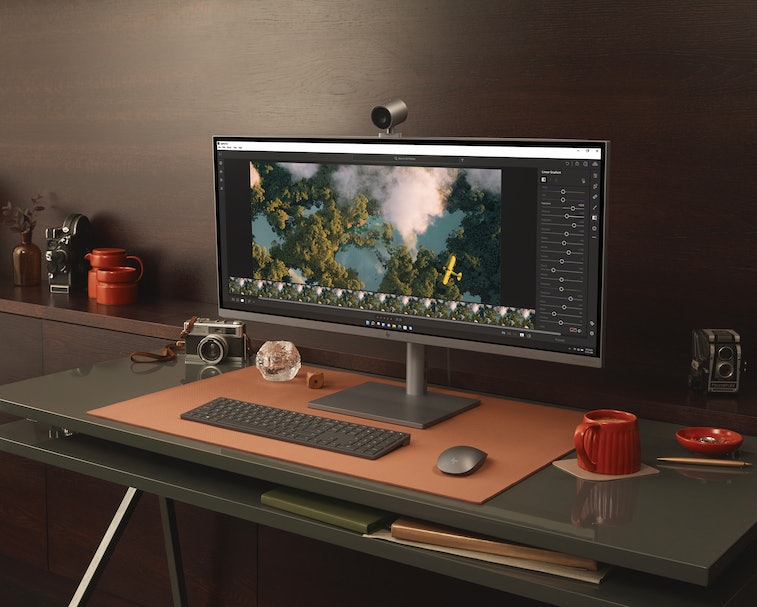 I like building a gaming PC as much as I enjoy clutching a dub in Apex Legends — a rare occurrence, surely — but HP’s new Envy 34-inch All-in-One (AIO) is making me, well, “envious” of anyone who can afford the luxurious desktop computer. HP isn’t kidding by calling the computer an “all-in-one”, packing it full of top-tier specs and innovative features.

The Envy 34 AIO looks like a fancy business machine, but the internals tell a very different story, one that will make any GPU-starved gamer out there check their bank account and dream. Starting at $1,999, and likely climbing much higher with the best configuration, HP knows what it has here. It’ll be out this October on HP’s site, though it should eventually trickle into your local electronics retailer.

Everything in one — To match the 5K, 34-inch ultrawide (21:9) micro-edge display, HP put the most sought-after GPU on the market into this AIO desktop computer. Yeah, the Nvidia RTX 3080, which is so hard to get it might as well be an urban myth at this point, is on board this computer. It’s not clear whether the 3080 is the desktop or mobile edition, the latter which is roughly 50 percent slower overall according to UserBenchmark. Regardless, either version of the 3080 can do ray tracing, DLSS, and handle modern games at high, stable framerates.

Paired with the GPU is an Intel CPU. It’s possible to get up to an 8-core 11th-generation Intel Core i9 S-series processor, with the higher-end i9 desktop chips known for their gaming prowess and high overclocking capabilities. The hyper-threaded CPU (8 cores, 16 threads), which is based on Intel’s 14nm architecture, has a max clock speed of 5.3 GHz, with some models of the CPU being “unlocked” for users to do their own overclocking. Again, it’s not stated which model of the 11th-generation Core i9 is available on this computer, but they’re all incredibly powerful and made for gaming. You won’t have to worry about the CPU creating a bottleneck for the GPU on this PC.

As far as the rest of the internal specs go, HP is holding onto that information for now. However, I’d expect the option for a large capacity PCIe 4.0 NVMe SSD to take advantage of the PCIe 4.0 lanes on the i9 CPU. With gamers and creatives in mind, starting at anything less than 32GB of RAM would be an insult, especially when current AAA games demand up to 16GB of RAM. For specifics, though, we’ll have to wait a few more weeks until it goes on sale.

A new type of webcam — The Envy 34-inch AIO isn’t all brawn, though it could easily coast on those specs. One of the innovative features found on this desktop is the adjustable webcam. I don’t mean adjustable in the sense that you can zoom in or lower it out of view, but I’m talking about being able to magnetically attach the webcam anywhere along the side of the monitor. In one product image, you can see the webcam on the bottom corner pointed down for scanning a sketch to work on digitally. It’s definitely a versatile feature. The 16-megapixel webcam has a 2 μm pixel sensor and uses advanced pixel binning tech that can improve lighting and frame rate.

Another interesting feature is the desktop’s base, which does more than simply hold your knickknacks. There’s are wireless charging pads on the base for charging your phone, wireless earbuds, or any other compatible devices. Smaller features include an embedded power supply unit and multiple Thunderbolt ports for superfast transfers.

The home office gaming PC — The first gaming PC I ever owned was an HP Omen laptop that I got for “school” back in college, and while the red RGB aesthetic suited my taste then, this Envy 34-inch All-in-One is what I’d buy now — if I had the money. It’s still a powerful gaming PC, but its more reserved looks make it easier to blend into your home office or any multi-purpose living space. Also, the “all-in-one” aspect of this desktop means you don’t need a gigantic desk that takes up a corner of a room for your PC. Trust me, when your PC tower dictates your setup, you start thinking about going smaller.