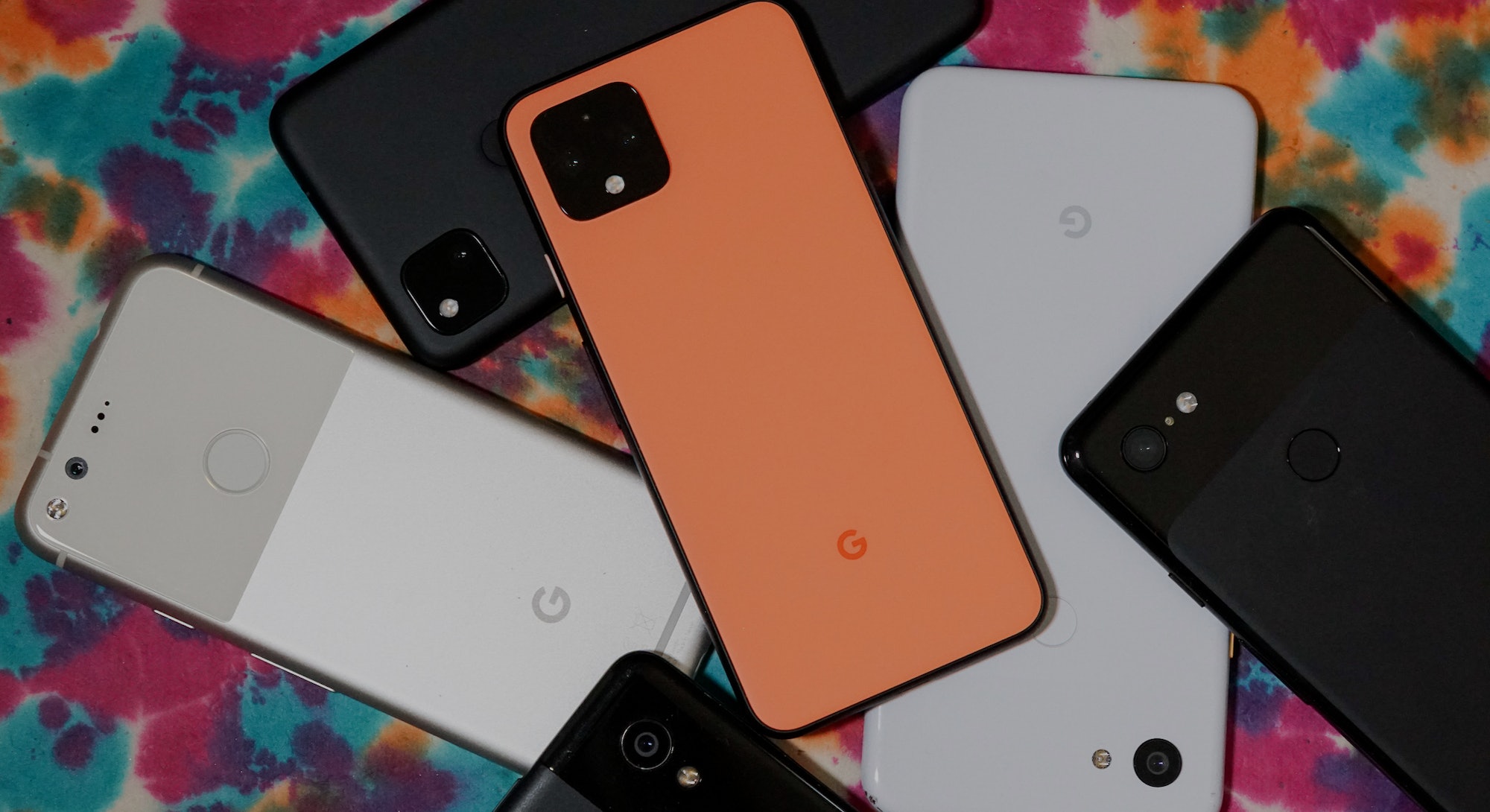 “Hardware is hard,” admitted Google CEO Sundar Pichai in May.

Pichai was speaking on the challenges Google has faced building an ecosystem of hardware products that encompass everything from its Pixel Android phones to its Nest smart home devices. But the adage that “hardware is hard” perfectly summarizes the tragedy of the Pixel phones and also why it needs to be rebooted.

Since 2016, Google has released new Pixel phones on an annual schedule. Reviewers (including myself) knocked the original Pixel for being an iPhone look-alike on the front and an HTC knockoff on the back. The Pixel 2 in 2017 seemed like a step in the right direction with Google giving the phone more of an identity. And even though everyone derided the Pixel 3 XL’s “bathtub” notch, the more polished materials and tolerances (metal finally bled into glass smoothly) and dual-selfie cameras set it apart.

Then the Pixel crashed with the Pixel 4. The phone was widely panned for its boring design, horrible battery life, over-engineered Soli face unlock sensor, and its lagging camera system (it didn’t come with an ultra-wide when every new phone added one).

The news that Google has discontinued the Pixel 4 nine months after its release proves the point I made in my Pixel 4a review: Google is lost when it comes to making phones. It’s time to rethink what the Pixel is. This time, hopefully with more focus and long-term vision instead of what has felt like Google winging things from year to year.

The Pixel 4 failed but the Pixel can still be saved. Google has been collecting all the necessary pieces it needs for the Pixel’s rebirth. Here are the cards Google needs to play to set itself up for success in the 2020s and break up Apple and Samsung’s longstanding duopoly.

The Pixel 4 failed but the Pixel can still be saved.

When the first Pixel launched, it was fairly clear that Google positioned it as a flagship phone that would compete with the iPhone and Galaxy. At the very least, Google intended for the Pixel to become a third-place phone of choice. That, of course, didn’t happen.

Pixel sales have been absolutely abysmal. According to IDC’s estimations, Pixel sales accounted for less than 3 percent of all U.S. phone sales in 2019. In comparison, Apple and Samsung took home about 46 percent and 32 percent of U.S. smartphone sales in the same year, according to Counterpoint Research. The Pixel’s performance globally is even worse since it’s not available in many countries.

While Google doesn’t share specific unit sales for the Pixel, we know that sales only picked up after the more affordable mid-range Pixel 3a and 3a XL were introduced last year. “With the launch of Pixel 3a in May, overall Pixel unit sales in Q2 grew more than 2x year-over-year,” Pichai said during Google’s Q2 2019 earnings call.

We also know that new Pixel 4a sales are off to a good start. Ignoring the fact that I personally think the mid-range phone is forgettable and feels cheap, the $350 price is a very good value, especially during this recession and pandemic. There’s no way to know to what extent the Pixel 4a “sold out” — available supply could have been limited — but it at least shows that people have not yet given up on the Pixel.

If Pixel 3a sales helped “double” Pixel sales and the Pixel 4a has “sold out,” it would seem obvious that Google’s phones should simply be affordable and mid-range. More phones like the Pixel 4a, right? Yes, Google should release new value-conscious phones every year. But success in the midrange doesn’t mean Google should abandon a premium Pixel.

For most people, a mid-range phone Pixel is enough. It’s just speedy and responsive enough to run Google’s apps, Instagram, TikTok, etc. But having reviewed phones for a decade, I can tell you that the runway isn’t very long. Even with Google promising three years worth of Android updates, the less powerful processors inside of phones like the Pixel 4a will not go very far in a few years. Certainly not as far as an iPhone (even the 2020 iPhone SE) with Apple's powerful chips.

Google should continue to release premium, flagship Pixel phones. These would be the aspirational devices — the “pro” version if you will. The flagship Pixel should be able to hold its own against whatever new iPhone or Samsung Galaxy or OnePlus Pro — tit for tat.

That means having a design made of high-quality materials; having the fastest available chipset; having a large and bright display with a fast refresh rate (120Hz is quickly becoming the standard); having all-day (if not longer) battery life; and having all of the bells and whistles a flagship phone should have like fast wireless charging, IP68 water-resistance, great stereo speakers.

Most importantly, this state-of-the-art Pixel needs to have a camera system. It needs to have a triple or quadruple-lens camera, not just a single or double-lens one. Any flagship Pixel that comes without an ultra-wide in 2021 is dead on arrival. iPhones will have LiDAR sensors in addition to better triple-lens cameras. And almost all flagship phones will have some kind of periscope telephoto lens for insane zoom. The Galaxy S20 Ultra’s 100x “space zoom” was overkill, but expect more reasonable zoom like the more usable 50x “space zoom” on the Note 20 Ultra to be standard.

It won’t matter if the Pixel has the best computational photography that uses heavy machine learning if the whole camera system lags behind the competition. Google can’t afford to repeat another failure by positioning a flagship Pixel as The Best Camera. That didn’t work and it won’t work again. Google needs to bring the whole package for the next flagship Pixel. Switching the top-of-the-line Pixel to a mid-range chip — the Pixel 5 is rumored to use a Snapdragon 765G chip instead of the more powerful 865 or 865+ chip — isn't going to help the Pixel in the long run.

Apple has leapfrogged Android on performance because it designs its own chips. It tunes every part of its A-series chips for peak performance. That means the CPU and GPU ramp up and down when iOS needs it; it’s why iOS devices are so much more powerful than Qualcomm’s fastest Snapdragon chips. This deep hardware and software integration is also why iOS devices are more power-efficient and a big reason why comparing milliamp-hours between iPhones and Androids isn’t a fair comparison. iPhones do more with less.

Google should copy this vertical integration between hardware and software for the Pixel. Continue developing Android Open Source Project. But for its own Pixel phones, which have always been “pure” Android with its own exclusive features (i.e. Night Sight, Call Screening, Duplex), it’s time to create a special sauce.

In April, Axios reported that Google “has made significant progress” toward developing its own chips for future Pixel devices (and Chromebooks). The 5-nanometer chips was co-designed with Samsung and could better compete with iPhones in theory.

Tighter integration is going to be very important over the next decade.

Powering future Pixel devices with its own custom silicon would allow Google to “build the whole widget” as Steve Jobs was fond of saying. It’d mean Google would be able to tune everything from the CPU and GPU, to the image signal processor for the camera, to the on-device machine-learning chips, to the power controller just like Apple does with iPhones. Pixels would not be saddled with optimizations for someone else’s chips (Qualcomm’s) which are designed to cast a wide net on Android devices of myriad feature sets.

This tighter integration is going to be very important over the next decade. It will be the difference between a device that puts privacy at its core (i.e. on-device machine learning processing) and one that’s at the mercy of another company’s security. It will create a divide between devices that are powerful enough to handle real-time augmented reality overlays and less-powerful ones that can’t.

It’s in Google’s best interest to control the whole widget. Doing so would mean major shortcomings like the Pixel 4’s terrible battery life never happen again. It’d pit Google directly against Apple and if executed properly could reinvigorate the spec race among Android phones. If, say, the next Pixel is orders of magnitudes more powerful than whatever Samsung releases it’d be an unignorable show of force.

Google is at its best and most interesting when it gets weird. Compared to Apple, which only ships products and features it feels are polished, Google has always emboldened its designers to dream big. Failure stings, but it also means valuable lessons are learned.

Some people believe Google should experiment in its labs and not ship half-finished products. Customers shouldn’t be beta testers. I agree and disagree. For Apple, it makes sense. They’re a less playful company when it comes to hardware because it makes up such a large chunk of its business. Stumbling with hardware hits harder. Google is different because it’s a service and software company first. The company still doesn’t have the same hardware chops as others. Failed hardware has not really hurt its bottom line and unlikely will. Failing often and quickly iterating on a product or incorporating ideas into new products is still very much a Google-y way of life.

Google Glass, Nexus, Pixel, Project Ara, Daydream VR headsets, Project Tango, Soli, etc. — they all failed. They go down in history as Google blindly feeling around in the dark. Nobody can say they were boring or unoriginal ideas, though. All of them pushed hardware forward with fresh ideas. This is the Google we need — a company that inspires. Few companies can bankroll far-flung ideas. Google can and it should.

A leaked document suggests Google is getting freaky again. It’s reportedly working on a foldable Pixel, codenamed “Passport.” Mario Queiroz, former general manager of the Pixel hardware, said last year Google was experimenting with foldables, but cautioned that they weren’t ready. While he said Google had been “prototyping the technology” for a “very long time” he also said that he didn’t think “there’s a clear use case yet.”

Queiroz is correct that foldables are still very new. It’s possible the crease never disappears, but Samsung at least seems to be making major strides with foldables and Google could help lead the charge. The Galaxy Z Flip launched with the first foldable glass display and Samsung seems to have addressed virtually all of the complaints about the original Galaxy Fold with the Galaxy Z Fold 2 coming later this year.

There’s no better time to get weird with Android again. The platform needs it. iPhones will soon get widgets with iOS 14 and unless Google does something wild with hardware, there’s increasingly little reason to choose Android software over iOS.

So that is my proposal. Google has the money to start over with the Pixel and frame it as three separate types of devices in a family: affordable (mid-range), powerful and reliable (flagship), and future-facing (foldables).

For the entirety of the 2010s, Apple and Samsung have ruled the smartphone world with iron fists. But their fortresses are not impenetrable. Huawei, Xiaomi, and OnePlus have all proven they can scale their walls. It has been a story of embarrassment that Google has advanced very little with the Pixel in four years.

Google is not one to let failures stop it from trying. It has the money to spend on big marketing campaigns. It just needs devices that click with users. If there’s anything Google can learn from Samsung and Apple, it’s that one size and style doesn’t fit all. It’s time to make more sizes and more styles.