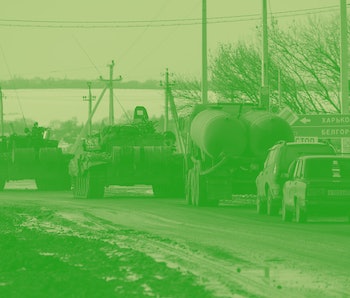 As Russia’s invasion of Ukraine continues, ​​a Google Maps feature that provides live information about traffic conditions has been paused after concerns that it could spread details about military operations to people around the world. Over the weekend, Dr. Jeffrey Lewis pointed out on Twitter that a Russian military formation showed up in Google Maps as a traffic jam.

Clearly, the navigation app isn’t intended to be used as an accidental open-source intelligence tool (OSINT), so Google is hiding live traffic information from global viewers. It will still be available to drivers in Ukraine using turn-by-turn navigation. According to the Washington Post, the decision to disable live traffic features came after consulting Ukrainian government officials.

Live traffic data— Google Maps’s traffic data is based on anonymous location data collected from Android smartphones. If a large number of phone signals appear to move slower than usual, Google Maps updates to indicate the congested roadways. In the case of the Russian formation “traffic jam,” Dr. Jeffrey Lewis believes that the traffic data is most likely not from soldiers carrying smartphones but instead, civilians getting stuck at roadblocks.

Real-time traffic data doesn’t convey much information about military actions and without additional information, it could lead people to faulty assumptions about the conflict. Congestion isn’t always a direct result of military actions— it could instead be the result of construction, accidents, or people fleeing the area.