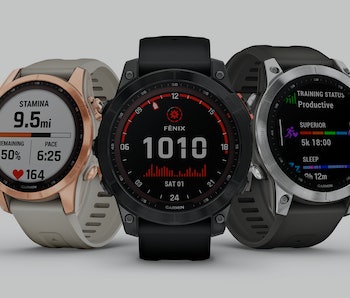 Well, it looks like even Garmin is dropping subtle hints that we should stay on top of our fitness-related New Year’s resolutions. Following some recent leaks, Garmin just released the Fenix 7, the latest update to its lineup of beefy smartwatches with a bunch of tools to help you stay on top of your training.

Compared to the Fenix 6 released more than two years ago, there are a few notable upgrades, including a built-in flashlight, a touchscreen, and a stamina tracking tool. Of course, the Fenix 7 also has the many bells and whistles that come with a Garmin smartwatch, like navigation through multiple global satellite systems, daily workout suggestions, and a recovery time advisor. But for the most part, the Fenix 7 doesn’t stray too far from Garmin’s formula for smartwatches, especially compared to the Fenix 6 Pro.

Combined sapphire solar edition — The latest Fenix 7 will come in three different case sizes, 42mm, 47mm, and 51mm, and three different editions, including standard, solar and sapphire solar. With the latest update to the Fenix series, Garmin decided to offer a combined sapphire and solar option, whereas before you had to choose between the edition that included solar charging or the edition with a scratch-resistant sapphire lens.

Garmin upgraded the Fenix 7 with more solar surface area and said it could double the solar gains compared to the Fenix 6. Now, the Fenix 7’s battery can last up to five weeks in smartwatch mode and up to five days in GPS mode. The Fenix 7 features a new workout tool that monitors and tracks your exertion levels and uses that stamina data to show you if you’re overexerting yourself at the start of your workout.

One of the more practical additions to the Fenix 7 is the hands-free, multi-purpose light. The light can be set to red or an adjustable white and can help you set up camp in the dark. You can also set the light to strobe mode so that it alternates between white and red and follows your running cadence, making running in the dark a little safer.

Worth the upgrade? — Garmin’s latest Fenix smartwatches start at $700, for which you’ll get the standard edition with a 47mm case. If you’re going for the primo Fenix 7, the sapphire solar edition with a 51mm case, it’s going to cost you $1,000. The Fenix 7 looks like it’s available at some retailers already, but the Garmin website says they will be available to ship in five to eight weeks.

Alongside the Fenix 7, Garmin also released the second generation of its Epix smartwatch, which features a more low-key design than the Fenix series. Starting at $900, the updated Epix features a 1.3-inch AMOLED touchscreen display and is ready to ship in one to two weeks.

If you already have any of the Fenix 6 models, it may not feel very worth it to upgrade to the Fenix 7 on an overall specs basis. But if you really felt like your smartwatch needed a built-in light or a touchscreen, the Fenix 7 was designed for you.